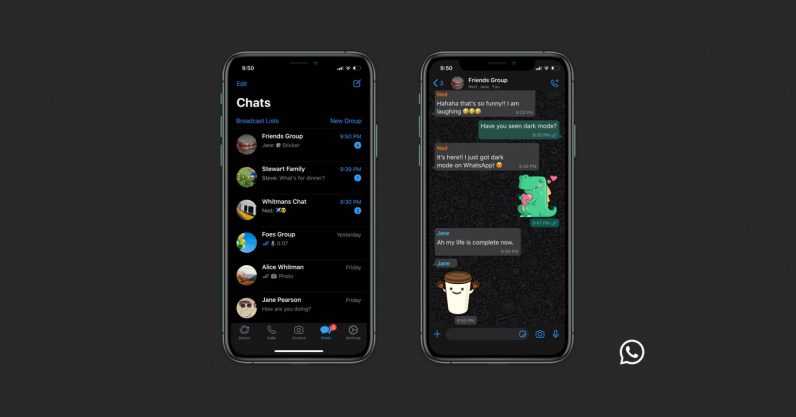 WhatsApp is finally launching its most requested feature: Dark mode. The stealthy option has basically become a must-have feature for apps over the past year or two, and though a select few Android users have seen previews of the feature show up, this is the first time the company is officially supporting it for all Android and iOS devices.

WhatsApp notes that its primary focus was reducing eye-strain in low light environments.  That’s why, unlike some other apps, the dark areas aren’t quite pitch black. During testing, the company found the contrast of pure black and white can lead to eye fatigue, so it’s using a dark grey background instead. It also used colors and other design elements “to make sure the most important information stands out.”

Moreover, it’s matched the shade of the dark grey backgrounds to fit the respective OS. Here’s what it looks like on iOS:

To activate the feature in Android 10 and iOS 13, simply go to system settings and enable dark mode. On Android 9, you can go to WhatsApp Settings > Chats > Theme and select ‘Dark.’

To celebrate the announcement, WhatsApp even made a little ad featuring a previously-unreleased version of The Sound of Silence by Paul Simon:

At last, you can use WhatsApp without your phone shining like an awkward flashlight in the middle of a dark room. The feature is rolling out “in the coming days” to the latest version of WhatsApp.

Read next: Google algorithm teaches robot how to walk in mere hours