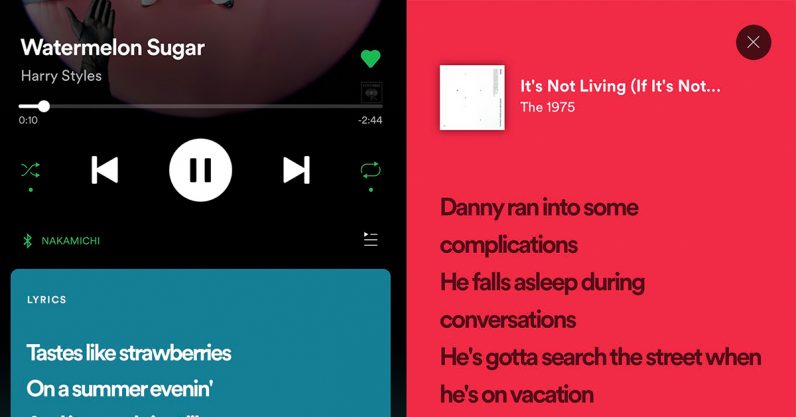 Spotify is finally giving you the tools to sing along without embarrassing yourself — or mumbling while you pretend you know the lyrics.

The streaming service is in the process of rolling out a new feature that displays the lyrics of a song as it plays, sort of like karaoke but without the drowned out vocals. There’s one catch, though: it appears that so far the functionality is only available to a limited number of users, according to AndroidPolice.

If you’re not one of the lucky ones, here’s what the feature looks like:

The lyrics are provided by Musicxmatch, which some users have already relied on in the past in order to display lyrics on top of songs.

For what it’s worth, the feature won’t work for all tracks on Spotify, but supported songs will be indexed with a “Lyrics” label in playlists. Pretty handy.

As you can see in the screenshots above, the feature supports various languages, even though some users have noticed it doesn’t always, uhm, show lyrics in the right language. Hopefully, such kinks will be ironed out once the functionality makes its way into the official app.

There’s no telling when the feature will reach all users, but considering the pace at which the Spotify has been pushing it to select users, it shouldn’t take too long.

Read next: Google Ads is infested with investment scams that earn it millions