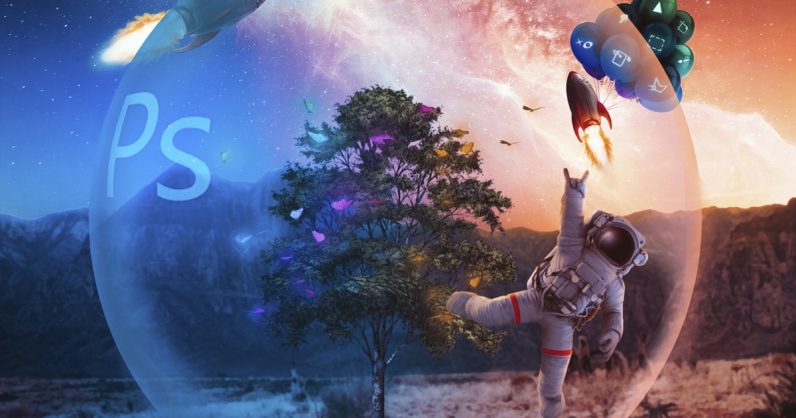 Adobe Photoshop, a synonym and often a verb for manipulated and edited images, has turned 30. After launching its app on iPad last year, the company said it’s looking to expand its presence on more platforms in the near future.

On this occasion, Adobe is bringing four AI-powered features to its desktop and iPad apps. On a call earlier this week, executives said they were looking to introduce more features powered by the company’s Sensei engine, which was launched in 2016.

On desktop, the company is bringing content-aware filling for multiple objects on one go. This feature lets you remove objects and fill the space with the present background, based on your selection. For instance, in the picture below, you can remove the leaf on the ice cream cone and fill it with pink-colored ice cream.

Along with this, Adobe is also launching an improved lens-blur function that supports photos with the depth map. The new feature relies on GPU rather than the CPU for processing, and supposedly delivers a more realistic bokeh effect.

[Read: Research: Early humans in Africa may have interbred with an unknown species]

As compared to the desktop users, Photoshop for iPad users should be excited because they’re set to get an object-selection tool just like the one available on desktop. The Sensei-powered tool automatically pick objects based on your general selection through an AI. The new object selection was originally launched last year for desktop during Adobe’s MAX event.

Over the past couple of years, Adobe has been focusing a lot more on mobile products. Last year, apart from Photoshop for iPad, the company also released Fresco, a painting app for users using Apple’s flagship device. It also invested in tools to detect if a photo has been manipulated.

In a recent interview with The Verge, the company’s chief product officer, Scott Belsky, pointed out that the company’s mobile products were also gaining traction. He added that Photoshop Express now has more than 20 million users:

You see Photoshop Express, which, by the way, has — I think I can say this publicly — around 20 million monthly active users. This is a mobile app, Photoshop Express. You have, of course, Photoshop Camera, and then you have Rush and then Lightroom CC.

I’m not a designer or a photographer, so I might not care about Photoshop’s every feature. But I do indulge in meme-making and light photo editing for my stories or social media. So Adobe’s Photoshop series products are quite useful for that. For this reason, it’s important that the company invests in AI-fueled features into AI-fueled features so novices like me can create great or funny looking pictures.

Read next: Tesla Cybertruck pre-orders have purportedly blown past the 500,000 mark