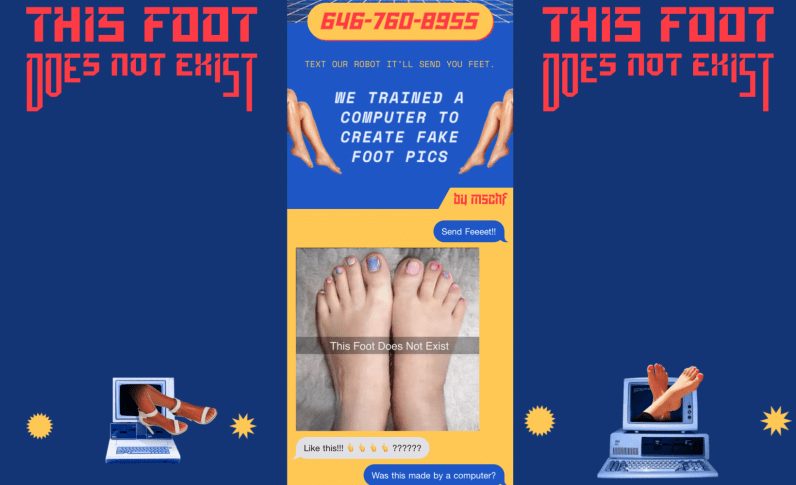 Yep, as the name suggests, it’s sort of like Wikifeet but for fake feet — and without any of the awkwardly specific comments. The site relies on a generative adversarial network (GAN) to produce eerily realistic images of feet. Of course, since these are all the figment of a computer’s imagination, you’re bound to see some gruesome deformities. So, buckle up.

Here are a couple of images my colleague Rachel Kaser received (thanks for your bravery, Rachel, the world won’t forget your contributions to the field of science).

I’m not sure what’s happening with the foot in the upper left corner, but it looks like a nasty skin ulcer. I’d have it looked at, if it were me.

Thisfootdoesnotexist.com was developed by creative agency MSCHF, which previously built a Chrome extension to help you watch Netflix at work unnoticed and a website that turns Wikipedia pages into “legit” academic papers.

“Why waste the marvels of machine learning on computer-generated feet,” you might wonder. Well, Daniel Greenberg, Head of Commerce, has the answer.

“Feet pics are commonly produced as a niche fetishistic commodity and have all the perceived transgressive elements of more traditionally recognized pornography, but without relying on specific pornographic or explicit content such as nudity, genitalia, or even extensive skin exposure,” Greenberg told me in an email.

“Second, because foot pics can operate in two discrete modes of content consumption simultaneously (i.e. they can be memes and nudes simultaneously, in the same public sphere), their perception depends entirely upon the viewer and the context in which the image appears,” he continued. “This results in an unusual economic paradigm by which the foot pic is both highly valuable and almost throwaway-worthless at the same time and this creates a highly intriguing supply and demand dynamic when creators/consumers fall on different ends of this valuation scale.”

Anyways, don’t let me distract you any further. Text +1-646-760-8955 for some ghoulish AI-generated feet. You won’t regret it. Just a quick heads-up: the service works only with US numbers. Sorry to everyone else, you’re out of luck.

Read next: Rumor: Nintendo may launch a new Switch this year