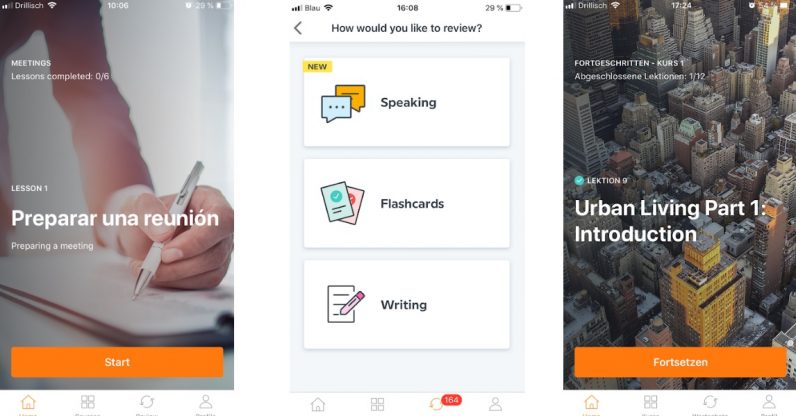 Babbel, the popular language-learning app, is getting a makeover. Updated language lessons now put the spotlight on bite-sized lessons, and users are encouraged to choose which lessons are more relevant to them. We got a chance to check out the new app and we’re liking what we saw so far.

Content refreshes, especially for those as long-lived as Babbel (which was launched in 2008), are a pretty common occurrence in the lifespan of an app or digital service. Sometimes it’s a new look (see Evernote’s decade-mark revamp), while sometimes it’s new content for a changing world. In Babbel‘s case, it’s the latter, as the service is being redesigned to meet the needs of, to use the company’s words “the digital generation.”

Over the course of last year or so, we’ve basically overhauled the complete look and feel of the product, close to every scrap of content, and introduced a bunch of new features that are aimed at personalization — what we call “pathing,” helping people find the right learning journey for then.

The new Babbel, according to Hansen, also addresses what she calls “shortened attention spans.” Lessons (of which there are around 60,000) are shorter, but easier to navigate. You can select your level of proficiency at the top of the list of courses, specifying whether you’re a complete newcomer, whether you used to be fluent, or whether you’re in need of specific information on customs and food. Hansen says there are different options if wanting to learn a language slowly over the course of years, and if “you’re going to to Germany in three months and want to focus on cultural topics.” New users can take a placement test to get them off on the right track, but after that it’s up to them.

Speaking for myself, Babbel‘s refreshed app definitely feels like what I call a “breaktime app,” meaning an app that can be used for a few minutes during a break period with no loss of productivity — a game of Solitaire or a quick glance at my friend’s selfies, for example. Babbel‘s new lessons fit into that sweet spot, delivering a solid chunk of content despite only taking up about five minutes of my time.

The new Babbel also offers a more sophisticated speech recognition system and emphasizes verbal repetition, grading you on your pronunciation. This was surprisingly on point: I speak some German, but because I learned from family members, I speak it with a bit of an accent. Babbel was able to pick up on this and didn’t penalize me for it.

Traditional methods of language-learning involve hours of studying basics and deep immersion in the language. It begs the question: how can this modern, app-based form of language-learning replicate that in such small, bite-sized lessons? How do you become fluent by following what sometimes feels like a trail of linguistic bread crumbs?

In response to the shorter lessons, Babbel offers a handy progress chart, so you can at least feel like you’re getting somewhere. You can also take quizzes and challenges to keep your skills sharp. Hansen says the breadth of content with no direction was a problem for those who used the original version of Babbel:

Users would tell us “I don’t know where to start,” or “I feel overwhelmed.” … There’s so much in the product that users almost had a hard time finding the most relevant bit. If you’re planning for a trip or business, you might not have known there were lessons specifically geared towards travel or business customs. We’re onboarding new users in a way that allows them to choose their own adventure and go straight to the right lessons for them.

While no app can ever replace the expedient of immersion and practice, the lessons Babbel is now offering are pretty helpful, especially if you’ve got a particular goal in mind. These shorter lessons are definitely easier to fit into daily life.

Read next: Here's how to add italics and bolding to your WhatsApp messages