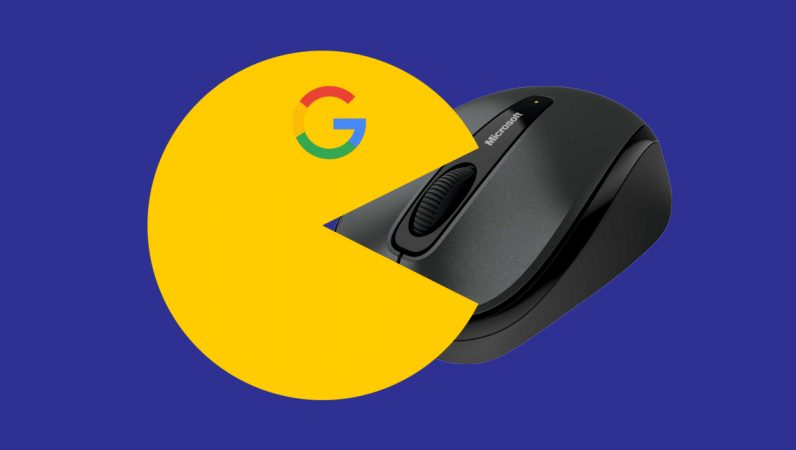 Google is hungry for your clicks. But it turns out that more than half of all Google Search queries now result in no clicks.

As of June 2019, 50.3 percent of Google searches received zero clicks. By contrast, searches with organic clicks to non-Google websites now make up only 45 percent of all traffic.

That is according to data from marketing analytics firm Jumpshot based on 40 million browser-based searches on desktop and mobile in the US. The data was crunched by Rand Fishkin, founder of audience intelligence search engine SparkToro.

Even worse, it seems this trend towards zero-click searches has seen steady growth since 2016. In the meantime, organic reach for third-party websites has continued to shrink.

To be fair, it’s not all that surprising that a large number of searches result in no clicks – especially when we factor in that Google has been shifting its attention to summing up results in snippets at the top of Search. While those might be easier to scan for users, they do eat into third-party websites’ traffic.

We’ve reached out to Google for comment, but have yet to hear back. We’ll update this post accordingly, if we do.

However, as Fishkin points out, a US congressional panel recently asked Google if it was true that less than 50 percent of searches lead to non-Google websites. It was a simple Yes-No question, but the Big G eschewed giving a direct response. Instead, it took a dig at the authenticity of the data cited – without denying it.

“The author of the report cited in our letter did not make his specific methodology clear, but it’s inaccurate to portray featured snippets as simply answering a question and never resulting in a click,” the company wrote in a statement. “Many sites strive to have their content highlighted as a snippet, which can drive meaningful traffic.”

Interestingly, Fishkin further notes that Google’s search dominance has reached a 94-percent market share (the data is based solely on browser-based searches).

For the record, this isn’t an entirely new development. Back in June, Search Engine Land cited earlier research from Fishkin that suggested the number of zero-click searches in the first quarter of 2019 had reached nearly 49 percent of all queries.

Still though, the outlet noted that the Fishkin’s methodology wasn’t exactly bulletproof.

“The figures are based on over one billion web browser searches on ten million domestic desktop and Android devices in the US,” Search Engine Land wrote. “It does not include searches conducted on iOS devices, the Google Search app, voice-only devices or searches that ended in a click to a mobile app.”

The finding reignites discussions on Google’s anti-competitive conduct, which many have criticized in the past.

Indeed, reports from yesterday suggest that 23 European job search firms are working on filing an antitrust complaint against Google with the European Union. The companies allege the Big G placed its own job search results above those of competitors.

What makes matters even more pressing is that it’s hardly the first time the search engine giant has drawn criticism for its anti-competitive practices.

Read next: What Slack and Fortnite can teach your business about freemium pricing