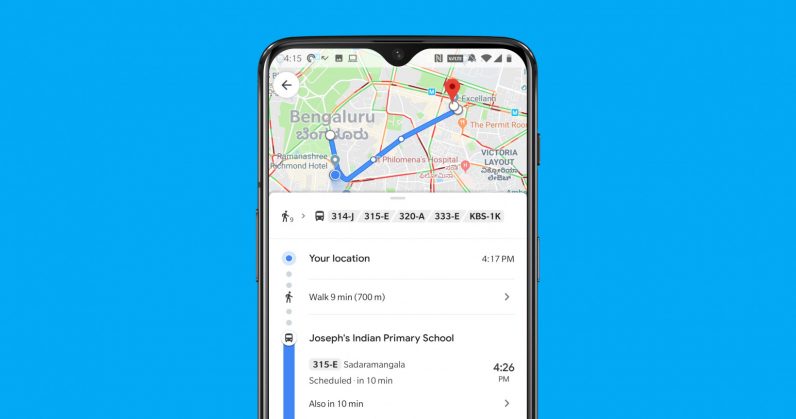 As someone who mostly relies on public transport to get around Bangalore, aka India’s IT capital, I’m happy to report that Google has just rolled out a bunch of commuter-friendly updates to Maps for users in the country, that will make it easy to optimize my daily trips to and from work.

This is especially handy for me in Bangalore, where buses are frequently delayed owing to the city’s horrendous traffic — and when they often have destination and route names displayed only in Kannada, a language I can’t yet read fluently.

Secondly, Google is also bringing mixed-mode direction results for trips that combine auto-rickshaw and public transport. That makes it easier to figure out which modes of transport to choose to get to your destination quickly, or with minimal walking. The feature is limited to Delhi and Bangalore for now.

It also helps with getting around in autorickshaws: the app displays fare estimates, so you know what you should be charged before you begin haggling over the cost of your trip.

Beyond commutes, Google is also paying a bit more attention to train travel. Not surprising, given that India is home to one of the largest railway networks in the world, and it carried more than 8.2 billion passengers between 2017 and 2018.

With real-time status for long-distance trains, Maps now lets you spot any delays on your railway journey right from within the app. Google says the feature was built in partnership with the Where is My Train app that Google acquired last year. With that, it’s far easier to cut down on wait times and hours wasted lounging around crowded stations.

At last check, the features have already gone live on Android, iOS, and mobile web.

Read next: CHEAP: The discount is strong with this BB-8 car charger at just $13.97