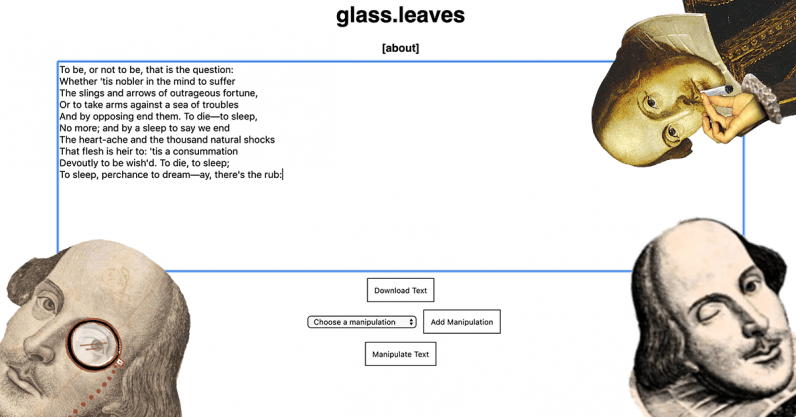 This might be (read: definitely is) meta, but the paragraph above is what happened when I put this entire article through glass.leaves. Magnificent, isn’t it?

At its most fundamental, glass.leaves is a web app that allows you to manipulate text. You put words into the box, then you can apply a range of filters, called “manipulations.” These manipulations vary wildly – they can jumble words together, randomly destroy parts of the text, remove punctuation, replace specific vocabulary, and much, much more. In other words, glass.leaves is a tool that lets you experiment on your words.

Here’s an example where I put this and the two preceding paragraphs into glass.leaves, and applied a couple of manipulations. Yes, this is getting even more meta.

For ease of reading, here’s what came out of the glass.leaves app:

What? And, importantly, why?

Well, it took what was a pretty normal intro to an article and made something completely different. There are a gamut of lovely phrases in there that previously didn’t exists at all. Some of my favorites are: “applied a jumble of Yes,” “vocabulary is a example text,” “punctuation is definitely manipulations,” and “the glass above is what happened.”

And all this was from just selecting two manipulations, specifically “reverse sentences” and “shuffle nouns” – the possibilities are endless. To explain why and go into more depth though, we need to look back at some history.

Word experimentation has been integral to literature and poetry for generations. Probably the most famous (but definitely not the only) example of this is the cut-up technique, something popularized by William Burroughs. This is as it sounds: literally cutting up a piece of text and stitching it back together to create something new. 1959’s Naked Lunch is the most famous example of this methodology.

So, this experimentation is somewhat reflective of technology at the time. While Burroughs was working with the cut-up technique in the 1950s, he was in an era when the printed word was cheaper and more widely available than ever before. Cutting up words and phrases, and splicing them together makes a lot more sense in these conditions.

You can see the link between the cut-up technique and glass.leaves immediately. The app was designed by Gregory Kan, a poet and programmer based in Wellington, New Zealand. He told TNW he “loved using collage and sampling techniques in his poetry,” but that involved him “(quite literally) cutting up texts.” He then realized this could be done “more systematically,” which led to the creation of the app.

If we believe the methodology of the cut-up technique reflected its environment, glass.leaves clearly reflects ours – it’s fast-paced, powerful, and option-filled.

How does it impact writers?

Kan believes glass.leaves allows creatives to not only take their writing “beyond what [they] can conceive,” but also “reinstate a sense of play” in their work. He was keen to point out that the project is “not trying to automate the entire writing process,” instead he’s interested by how writing “can [be] supplemented, scaffolded.”

This is the part that intrigues me. One of the things I love about art is how it offers you different perspectives. Whether this is something external – like learning about someone else’s life – or internal, such as gaining a deeper understanding of yourself, good art constantly questions.

Glass.leaves strips this down. Rather than offering the consumer a new perspective, it gives the writer the ability to look at their own work in a new light, something that’s harder to do than you’d think. In the example I shared above, it totally transformed a news story into something that’s fundamentally different.

Still, that’s a rather grandiose way of looking at the tool and one that doesn’t tell its full story. Basically, glass.leaves is fun. I’ve spent a lot of time plugging in text and seeing what comes out the other side. It doesn’t matter if you’re a serious, published poet, or someone who just thinks words are nice – you’ll enjoy yourself.

What’s the future for glass.leaves?

In a refreshing move, Kan told me he’s “quite happy to leave it as it is.” It’s a simple tool that doesn’t need to be any more complicated.

He did tell me about a sibling app he was considering though. Specifically, a “writing tool that makes use of, say, a recurrent neural network, which can produce an alternative version of every line or sentence or paragraph or poem you write.” In other words, it’d be like “you’re competing with the AI to find the best line!”

I’ll always be a sucker for the part of the world where art and technology collide. I mean, I couldn’t ever imagine coming across a tool like glass.leaves and not spending hours on it. And whether or not you share my enthusiasm, it’s inarguable that the app is a great idea done well. It doesn’t matter if you use glass.leaves as a serious literary tool, or just want to have some fun with words – it’s simply cool.

To have a play with glass.leaves, head over here, paste in some text, and go wild. You’ll have fun, I promise.