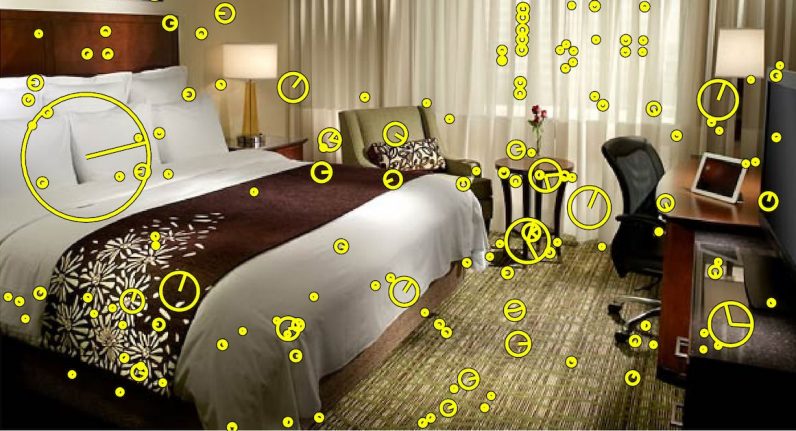 You walk through the door and set your bags on the floor. You pose for a selfie with your hotel room in the background, uploading it to Instagram with seemingly random hashtags. For your followers, the photo is a means of documenting your travels. For investigators, you’ve just taken a crime scene photo that might one day help them to track down victims of human trafficking.

Human traffickers use hotels around the world to stash their victims. They’ll often photograph them in these rooms, and post the images to non-indexed internet addresses (dark-web pages) with temporary links. A team of researchers recently developed a tool that shows incredible promise in the effort to locate these victims.

The tool – called Hotels 50K – utilizes a data-set containing more than one million images from 50,000 hotels to train a computer vision system to identify objects, decorations, colors, and other discernible markers present in the pictures. It’s an AI-powered tool that works like a facial recognition system for hotel rooms. The idea is that researchers find images of victims in rented rooms, obscure the victim, and tell the AI to look at everything else in the photos to determine where it was taken.

A million images might sound like a lot, but there are more than 17 million hotel rooms globally. And with experts estimating there are over 40 million humans enslaved in the world today, we need as much data as we can possibly get to help them. A million images for 17 million rooms isn’t enough.

The problem isn’t just with the quantity of images, but also the quality. Hoteliers take glamorous shots and edit the images to make everything look bright, shiny, and beautiful before posting them to the internet. Despite the number of these images in existence, they aren’t all that useful.

Human traffickers prefer more anonymous-appearing, grainy photos that focus on their victims, not the surroundings. That’s where all of us come in.

Abby Stylinou, one of the authors of the Hotels 50K research paper, told The Register’s Katyanny Quatch:

We aren’t able to train with [authentic human trafficking] images, since we don’t have access to many of them, and don’t typically know where they were taken.

Our selfies and Instagram photos, taken in hotel rooms, are closer in appearance to the images human traffickers use than the promotional photos the hotel chains release .

The researchers did a remarkable job with the data they have — the system correctly identified the specific hotel an image was from 24 percent of the time in a test of 100 photos. This will, presumably, improve with access to more useful data.

Three years ago an app hit the market called “Traffickcam.” It’s a simple, free app published by Exchange Initiative that lets you upload a picture of any hotel room you stay in to help fight human trafficking. The researchers who developed the Hotels 50K system rely heavily on this uploaded data. Unfortunately the general public is either disinterested in or unaware the app exists. TraffickCam, as of the time of this writing, has “10,000+” installs on Google Play with 276 user reviews. Apple’s App Store doesn’t show download figures, but only 34 people have rated it.

It’s possible those numbers are fudged, inconsistent, or only account for a specific version. We reached out to Google and Apple to ask for specific numbers, but didn’t receive an immediate response. Reuters recently reported that 150,000 people had installed the TraffickCam app, but TNW hasn’t been able to corroborate that number.

Still, even a million installs would pale in comparison to user counts for other popular travel apps. Trip Advisor has over 100 million downloads on Google Play alone.

TNW wasn’t the first outlet to make that connection. Here’s a TechCrunch article from 2016 with the headline “You can help stop human trafficking with the TraffickCam app.” Author Haje Jan Kamps wrote:

Personally, I think this is a great opportunity for the travel industry and the accompanying startup ecosystem to work together to help. Room 77, for example, are building a huge VR library of hotel room images, and companies like Travelocity, Hotel Tonight, Foursquare and Tripadvisor could easily leverage their app install base to encourage its customers to take photos of rooms as they check in. Come on, guys, let’s put that big data treasure trove to good use.

Three years later The Register published “How AI can help halt human sex trafficking – by identifying victims’ hotel rooms from pics,” and here we are again.

That’s two news cycles, three years apart, on a topic that combines the newsworthiness of AI and the immediacy of the human trafficking crisis. And the net result is somewhere in the area of 20,000 to 150,000 installs?

We’re not waiting on better AI; we’re waiting on more data. And you can help. Download TraffickCam here for iOS and here for Android.