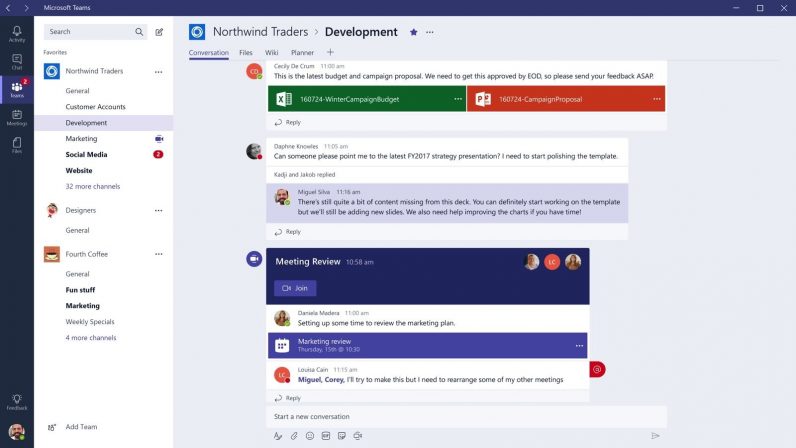 A report from Spiceworks shows that adoption of Microsoft Teams – the Slack rival from Redmond – is growing rapidly and is set to become the second-biggest workplace chat app by 2020, surpassing both Slack and Google Hangouts.

The findings come from a survey of 900 IT companies distributed across the US and Europe.

Spiceworks found that the penetration of Microsoft Teams grew from 3 percent in 2016 to 21 percent in 2018. This growth can be attributed partially to the fact that Microsoft made Teams available globally in 2017. Previously, it was only available to business users of Office 365.

Slack, on the other hand, has seen more modest growth, according to the Spiceworks report. Its market share grew from 13 percent in 2016 to 15 percent in 2018.

“The sudden rise of Microsoft Teams is likely influenced by the fact that it’s available at no additional cost to Office 365 users,” said Peter Tsai, senior technology analyst at Spiceworks, in a statement.

“Although Skype for Business has maintained the lead overall, Microsoft is putting more of an emphasis on Microsoft Teams as the default communications app for Office 365, which is enticing organizations to give it a try. As a result, we’ll likely see Teams adoption rates double in the next couple years,” he added.

The report predicts that Teams will reach 41 percent market penetration by 2020, while Slack will command 18 percent of the market. Just 12 percent plan to use Google Hangouts (it’s not clear if this refers to Hangouts Meet or the legacy version of the service), while a mere 1 percent plan to use Workplace by Facebook.

When asked about their perceptions of Microsoft Teams, the respondents said that they perceived it as the most secure product. Slack, on the other hand, was regarded as more innovative. Skype for Business, although loathed by many, ranked highly in terms of reliability and user-friendliness.

The success of Microsoft Teams felt inevitable, as many businesses are wedded to the Microsoft ecosystem. That said, it’s unlikely to replicate Slack’s success when it comes to hosting smaller teams and non-business online communities.

Moreover, Slack already has a leg-up over Microsoft when it comes to integrations. Slack’s courting of the development community, as well as most major SaaS providers, means it’s got plug-ins for everything from Trello to Twilio and more.

If you’re a chat sceptic, you can at least take comfort in the fact that it’s unlikely to replace email in the workplace. Only 16 percent of the IT professionals that responded to Spiceworks’ survey thought collaborative chat apps will completely usurp email within the next 3-5 years.

Read next: TNW presents the greatest gift guide in the world... ever