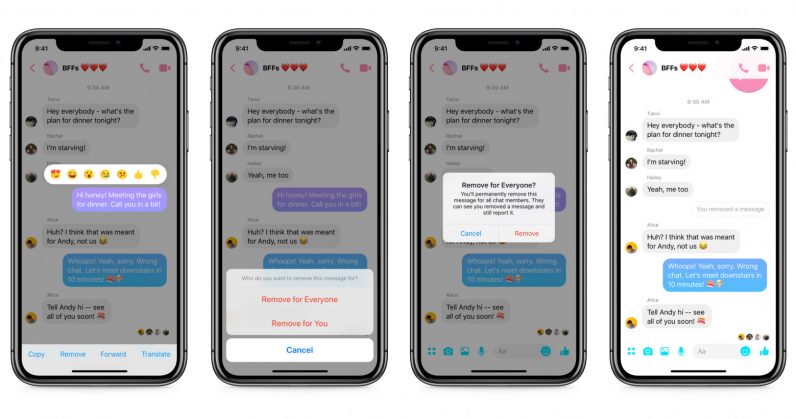 Back in April, we reported that Facebook was planning to implement a feature in Messenger to let you unsend messages. After multiple trials, the feature has now been rolled out to users in a few countries.

The ‘unsend’ feature for Messenger was promised seven months ago when Facebook secretly removed some private messages sent by CEO Mark Zuckerberg. In the past few weeks, screenshots of the new feature surfaced along with an updated preview that was released last week.

At the moment, the new feature is available only for users in Colombia, Poland, Bolivia, and Lithuania; it’s expected to be rolled out to other parts of the world soon.

But even after deleting a message, Facebook will retain it a little longer to check if it has been marked for abuse.

Facebook is also reportedly working on related features, such as the ability to set messages or chat logs to expire after a marked period of time. While these might indeed come in handy for maintaining your privacy, Facebook must also ensure that the feature doesn’t empower bullying.

As Facebook’s head of Messenger Stan Chudnowsky noted in his interview with TechCrunch:

However, the new feature is different from the one used to delete Zuckerberg’s old messages seven months ago. Then, the messages deleted were not restricted by a time limit of 10 minutes, and a “tombstone”- a note indicating that a message was deleted – was also not left behind. So that still remains a showcase of privilege that the masses can’t enjoy.

What causes you to use or wish for an unsend button in messaging apps most often? Let us know in the comments.

Read next: WhatsApp is testing a feature to add users with a QR code