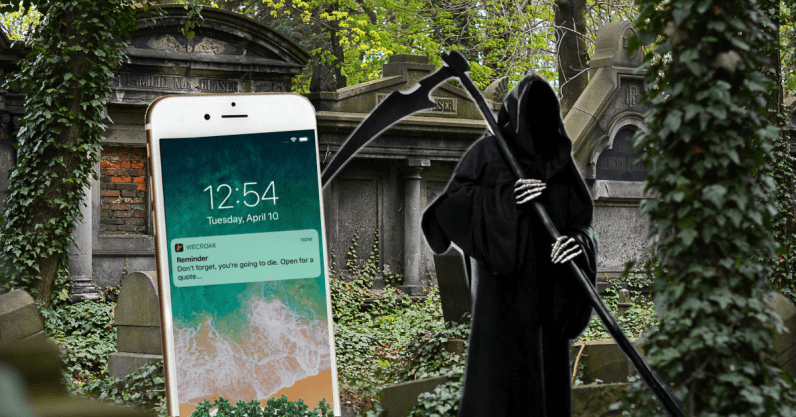 Most of us live denying the inevitability of death. We see death on the news but remove ourselves from the reality of it. Advances in medicine have given us a false sense of hope that death will never come, and because of this, death has become an even dirtier taboo than sex — or periods.

We shy away from things that invite discomfort, but it’s time we welcomed death into our lives — in app form.

WeCroak is an elegant and simple app that casually reminds you of death five times a day and it’s meant to encourage “contemplation, conscious breathing or meditation,” according to its website.

It’s as straightforward as it sounds, once you part ways with 99 cents, you’ll receive morbid push notifications like: “Don’t forget, you’re going to die,” and “Death is the only end if you assume the story is about you.”

You can also swipe the notifications to reveal an inspiring quotation related to death — and life. However, once you’re on the app, there’s nothing else to do but read the morbid quote and face your own mortality. Few seconds of existential dread, then move on with your day.

Thinking about your own mortality and relationship with death doesn’t exactly sound like something you want to confront five times a day, but WeCroak is based on the Bhutanese belief that contemplating death will eventually lead to happiness.

“We find that a regular practice of contemplating mortality helps spur needed change, accept what we must, let go of things that don’t matter and honor things that do,” WeCroak’s website explains.

Instead of waking up to a few Instagram notifications, you could be greeted with a quote from the Chinese philosopher, Lao Tzu: “People are born soft and weak. They die hard and stiff.”

I understand how this could come off a little strong alongside your breakfast through glazed eyes, but it’s better than the rose-tinted bullshit typical mindfulness apps spurt out.

Not just another mindfulness app

WeCroak distances itself from the hype (bullshit) surrounding mindfulness apps. Ironically popular meditation and self-care apps such as Insight Timer and Calm do exactly what they try to prevent — make you use your phone.

Many mindfulness apps have found their way onto my phone at one time or another, none of them lasting longer than a week. But I welcome WeCroak’s simple and disturbing reminders into my daily digital life as they help me transform my toxic relationship with my phone; turning it from a stressful distraction to a source of realization and peace — through death.

If you’d like to receive gentle reminders that death will catch up to you someday, download WeCroak on the App Store or Google Play.

And here’s some death inspiration for the road: “Death is the sound of distant thunder at a picnic” – W.H. Auden.

Read next: The best web developers know it all. So learn it all in this $13 training course