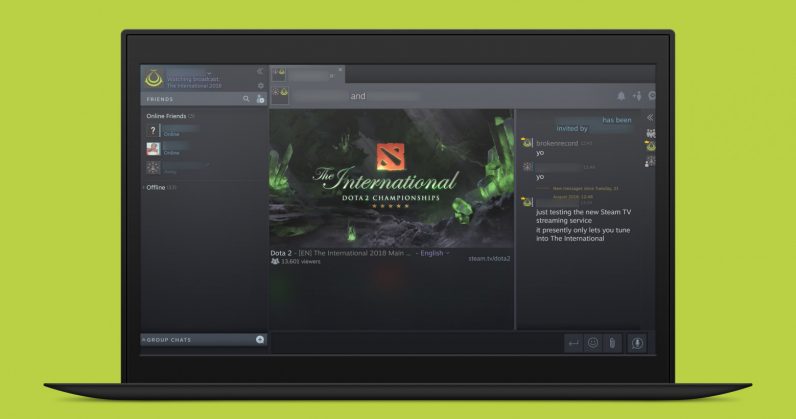 After launching it by accident last week, Valve Corporation has officially flipped on the switch for Steam TV, the company’s new service for streaming game videos.

At present, it’s only got a single live broadcast available: the prestigious Dota 2 tournament, The International, which is taking place until August 25 at the Rogers Arena in Vancouver, Canada.

In addition to the video stream, the web app displays your list of friends from Steam, and lets you tune in either on your own or with a group of pals, with your own private chat room alongside the broadcast.

The company noted in a blog post that it plans to extend streaming support to other games available in the Steam store through its Steamworks API.

Given that Steam already has a large audience of gamers looking to buy titles, and play and chat with friends, it makes sense to extend the platform to take up even more of their time with broadcasts.

But Valve has a lot of catching up to do: Twitch already has more than 15 million daily active users, and the Amazon-owned platform is reportedly trying to woo major YouTubers with multi-million deals. There’s also YouTube Gaming, and Microsoft Mixer to worry about – albeit to a lesser degree, as neither of those services have really caught on in the way Twitch has.

It’ll be interesting to see how Steam TV develops over time, and whether it can build up a community that will shop, chat, and stream all in one place. You can tune in right now with your Steam account to get a taste, while The International is on through this week.