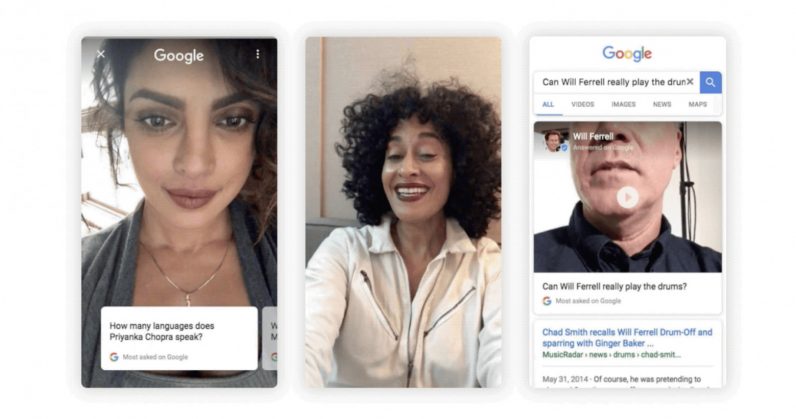 Google has, more and more, attempted to offer public figures a chance to manage their own Google results — and in this case it appears to be trying to have fun with those inane questions people are always Googling about their favorite celebrities.

The app is called Cameos, and it’s currently only available on the iOS App Store. It’s a terribly exclusive app. In order to even use it, you have to be issued an invite code. I mention that so you know I haven’t had the chance to test this personally because, you know — your girl isn’t exactly pulling in those Beyoncé crowds. But from the looks of it, once you’re in the app, you answer questions of your choice on video, and then those videos appear in the card to the side of your search results.

This appears to be an extension of a service Google offered last year to a certain number of celebrities. The results are the same: The person in question provides answers to the search engine’s most asked questions about them. Google doesn’t even seem to bother culling the most interesting questions. You get all the basics, like “How tall is X?” or “Where is X from?” Potential X’s can also respond to questions from “Google fans,” which are usually a little more detailed and probing.

If nothing else, this provides a little color to the most basic and silly of Google’s searches. While I have no idea how eager most celebrities and public figures are going to be to give video responses to questions about their natural hair color or birth name, I hope enough of them do to make it a thing. As it is, you can currently see a few results on Google searches for the likes of Priyanka Chopra or James Franco.

One of the people who appears in the pictures on the App Store is basketball player Kevin Durant. You can currently find his answers to several questions when you search his name. He also demonstrates why it’s probably not best to allow users to answer these questions personally. When asked how tall he is, he responds “Some people saying I’m 6’9″, some people say…” and I just want to shake him. It’s not an answer one can give an opinion on, KD. Get a darned ruler and found out the truth.

If you think you’re popular enough, you can find the Cameos app on the App Store.

Read next: Microsoft's AI can convert images into Chinese poetry