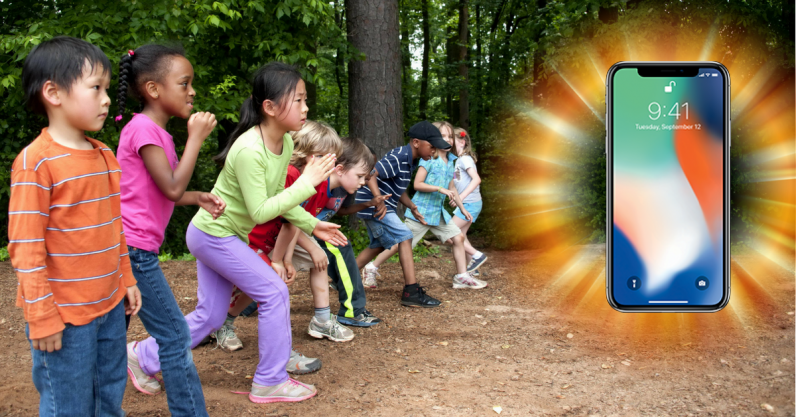 Goya-Move has a simple purpose: it wants to get kids active by blocking apps until they’ve hit a specific step count.

In fact, the app’s tagline – “Get Off Your Apps… and Move!” – definitely got me active, as my mind fell into a perpetual logical cycle. You know, because it’s an app you install to stop kids from using apps, but if you got off this app, it’ll let kids get back on their apps.

I don’t have time for this

Right you are. It works like this: you install Goya-Move on the parent’s phone and on however many children’s devices you need covering.

On the parent’s phone, it’s a normal app. But on the children’s devices, you give it the ability to remotely control the OS.

Then, the parent can set a step count for the day and the idea is that apps on the child’s phone are blocked until this figure is met.

There’s some more info in this video:

Sounds… somewhere between useful and dystopian

Yep. Now, I’m not a parent, so there’s a chance that I’m looking at this through an ideological – rather than a practical – lens, but the tech feels quite… ransom-y.

“What we’re doing is teaching moderation,” Isaac Gredinberg, President of Goya-Move, told me. Young people “are currently addicted to screens” and the beauty of the app is that “we’re not punishing kids, we’re teaching them instead.”

I can see the logic, but I feel that encouraging children to find an exercise they enjoy on its own merits, rather than defining movement as an anti-app activity is a better way to go.

Got to say, that remote management thing sounds a bit worrying

I had the same thought – what’s to stop a bad actor from accessing the phone and abusing this privilege?

Gredinberg told me that Goya-Move uses “the highest encryption and safety” in its servers. Also, that it doesn’t “collect any data from the parent or child other than their cell phone number and email” and they “don’t advertise” or “sell the information to anyone,” as the service is paid.

You get a week free using Goya-Move, then you have to pay a monthly fee that starts at $1.99 for one child. For each extra young person, you stump up another dollar.

There’s only one way to find out: we tested it on our intern, Cara. (Check out her awesome articles)

We all gotta eat, right? Plus, you know what Gen Z are like with their mobile phones and dabbing and tide pods and saying “it’s lit” all the time – maybe having her phone locked until she’s done some exercise would help Cara leverage her synergy to produce thinkfluential # C O N T E N T?

Installing Goya-Move on both phones was simple. I’d wager that anyone with a rudimentary understanding of app stores could get it to work.

And, as the person using the parent’s device, it was easy to get going. Selecting which apps to block, when they were blocked, and how many steps were required to unlock them was intuitive.

And did it work?

Kinda. When our workshy Gen Z representative tried to go on YouTube to escape the crushing reality of the nine-to-five, none of the videos would load:

The same happened when she tried to load social media apps or browse the internet for some fancy new emoji.

Yeah, apart from when Cara decided to play Tetris.

Wait… it didn’t stop her?

Barely any steps towards the target (a healthy 1,000) and Goya-Move let her play the block-based game with impunity.

It turns out that on iOS devices, Goya-Move only blocks apps‘ internet connection apps. In other words, if it’s offline, the world’s your oyster.

“This is a limitation to Apple iOS,” Gredinberg said. “The Android version lets you block internet based apps as well as local apps that are on the phone. Until Apple opens its source code up… we’re offering the best available option to block access.”

Looks like Cara’s going to be playing Tetris for a while. At least she’s not on Snapchat though, I guess.

While I like to believe that parents have the time and energy to get their kids moving without resorting to ransoming the phone, I get that life is rarely that simple.

Another option is to try a kid-focused device – such as the PhoneCloud PX1 – but this also has its flaws.

So if you’re worried about the amount of time your children (or interns) are spending online, Goya-Move is an okay solution, especially if you have an Android device.

It’s not perfect though. And, if I’m being honest, I’m always tempted to look beyond technology for a solution to a technological problem. But then again, I might just be old.

Read next: Your friends will think you're lame if you don't know about atomic crystals