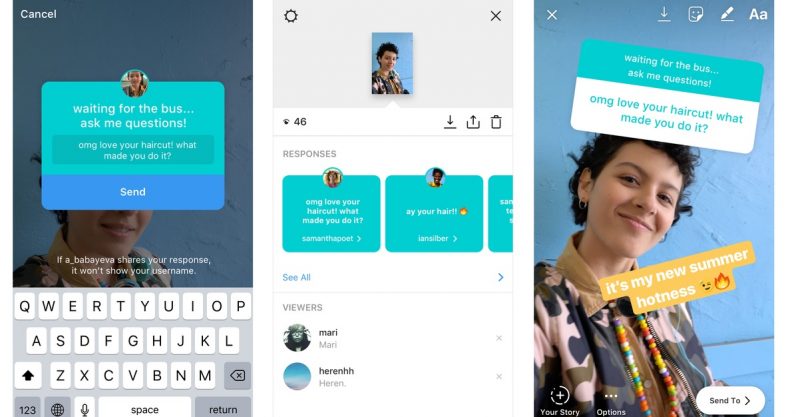 In the latest update on iOS and Android, Instagram has finally released the Questions sticker it started testing last month. Now you can not only hold live Q&As with your audience, you can also use the Questions to get recommendations on restaurants, music, or just about anything else you could want.

Instagram deployed the feature to a small group of test users who supplied early screenshots. It works slightly differently than I’d surmised from looking at a those — I assumed responses would be sent via DMs, but that isn’t the case.

In order to use the feature, you put the Question sticker on your Story, leaving an open slot in which users can ask you questions or give you responses to a question. To see their responses, you open the viewer list. You can only reply to each reaction you get by making a new Story.

While the primary use of this seems to be doing Q&As with followers — as displayed in the screenshots above — it also works as an unconventional way to get recommendations on local landmarks or businesses. When combined with geofilters, it more or less functions the same way as Facebook’s requests for recommendations.

In fact, I can think of just about any number of uses for Questions when combined with Instagram’s other features. Playing music in your Story? Ask your followers if they know of any similar bands. Going to see a movie? Ask for quick, one-word reviews of current releases. Post a Story about what you’re wearing a get your followers to recommend similar-looking brands by tagging them.

Either way, chalk that up to yet another of Instagram’s new features designed to lure users to Stories. Between Polls, Questions, Music, Mentions, Hashtags, and even regramming via Stories, Instagram is basically making its ephemeral format the one stop shop for everything that isn’t video.

Read next: Leak: Samsung's Galaxy Note 9 looks an awful lot like the Note 8