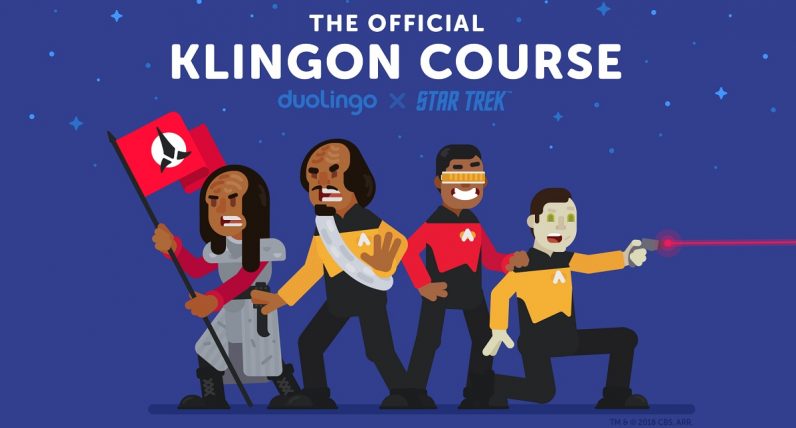 The course, which was created by a team of team of volunteers, has been in development for years. The first announcement for it surfaced in 2015. The lead creator, Trekkie Felix Malmenbeck, says the newest Star Trek show spurred further interest in the language:

The Duolingo course should help lower that barrier to entry by giving people a simple way to get regular exercise with the language. I suspect that this will lead to an increased number of Star Trek fans continuing their studies of Klingon. It also helps that Star Trek: Discovery has taken the language very seriously, meaning that there is now a stronger connection between the show and the language.

He’s not wrong — Discovery‘s dedication extends as far as providing subtitles in Klingon.

It’s not Duolingo’s first dabble in constructed language — it already has a course in High Valyrian, which you may have heard in Game of Thrones.

Still, as far as fictional languages go, Klingon is one of the most widely studied and understood. It was created by linguist Marc Okrand, who has since written an opera in Klingon. There are multiple Klingon-to-English dictionaries (including one written by Okrand himself). There’s even a Klingon Language Institute in Pennsylvania that has been educating people on the subject for over twenty years (and which also offers courses in the language, albeit not free).

Since Duolingo is now introducing fictional languages to its courses, there are a number of other tongues they can teach us. Tolkien’s Elvish languages have been similarly dissected by avid readers, and I would memorize the heck out of a Sindarin or Quenya course. The Dothraki language from A Song of Ice and Fire would make a nice compliment to High Valyrian.

A Duolingo spokesperson said that no further fictional courses are in development, but a be’ can dream, can’t she?

The Klingon course is currently available only on Duolingo’s website. It’ll come to the iOS and Android apps at a later date.