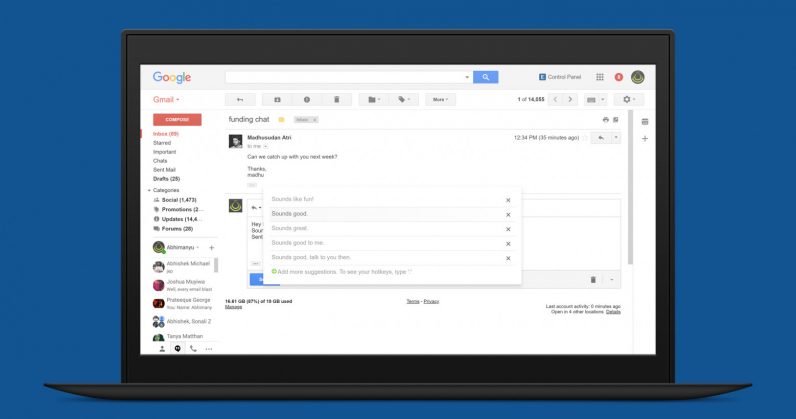 Google already lets you reply to emails quickly in Gmail and Inbox by selecting from a bunch of suggested responses in their mobile apps (Inbox’s feature works on desktops too) – but if you’re looking for something a little more substantial, EasyEmail might be worth a look.

The free service requires you to install a Chrome extension and allow it to read your emails, so it can train its machine learning system to generate suggestions. Once you’ve got it set up, it’ll prompt you to choose from a range of sentences and phrases that it deems contextually relevant.

While EasyEmail does what it claims to, your mileage may vary. It worked fine with some simple messages, prompting me to choose from smart suggestions as I began typing new sentences, similar to how autocorrect works on your phone. For example, when replying to a message from Mark and starting with ‘Hi,’ it’d suggest going with ‘Hey Mark,’ and other similar intros. Similarly, continuing my response brought up suggestions like ‘Sounds good,’ and ‘How about Monday?’

However, EasyEmail also ocassionally prompted me to use sentences from previous email conversations that were completely irrelevant (including some blasts from the past, like a decade ago). I also couldn’t get the text expansion feature (which is called ‘hotkeys’ here, and could be useful for quickly filling out commonly used bits of text, like your address) to work, and trying to launch it sometimes crashed my browser tab.

There’s also the question of privacy to contend with. EasyEmail says it only reads your messages to learn what sorts of responses it should suggest, and stores data that its machine learning system trains with on encrypted Amazon servers. Your data should be safe, but with this in mind, you may want to only use it for your personal inbox and not your sensitive work email.

So, it’s not perfect – but for folks like me who frequently freeze up when writing emails, this is a handy tool to help get through one’s inbox.

EasyEmail presently works only with Gmail and G Suite inboxes, and support for Outlook is in the works. Give it a try by grabbing the extension from this page.

Read next: "What is stress, really?" according to Boris