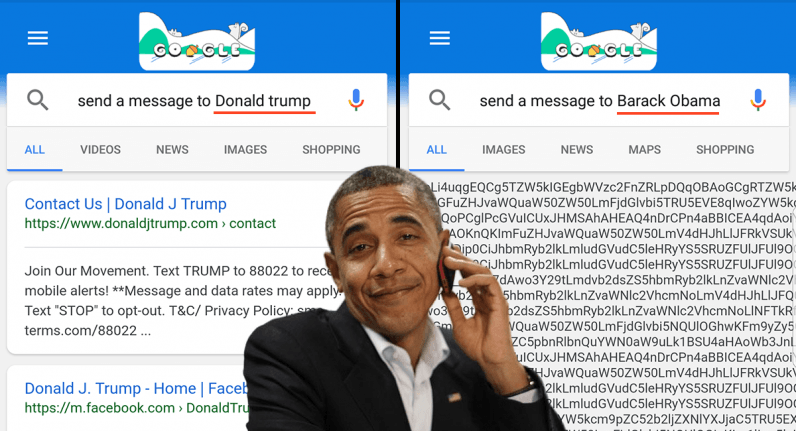 … Well, kind of. It appears that the Google app for Android is suffering from a bizarre glitch that breaks its interface anytime someone tries searching how to send a message to Barack Obama.

As spotted by observant users on Reddit, what triggers the bug is the search input – or namely ‘how to send a message to Barack Obama.” Instead of Obama’s contact details, the search breeds a long string of incomprehensible characters.

Here’s what happens when you type in the ‘magic’ words:

Whatever the cause of the bug is, it doesn’t seem to be affecting the overall functionality of the Google app. This means you can go on browsing through your content feed pretty much uninterrupted.

We tried reproducing the glitch by searching for how to “send a message to Donald Trump” and the app handled the request without any hiccups. We couldn’t reproduce the issue on iOS either.

As is often the case with such minor blunders, the Mountain View giant will likely fix the issue within the next couple of days. In the meantime, anybody interested in getting in touch with Obama ought to look up his contact details directly from Search.

We’ve reached out to Google to notify them about this unexpected behavior and ask about what caused this unusual glitch. We’ll update this piece accordingly if we hear back.

Read next: Here's what to expect from Samsung, LG and others at MWC 2018