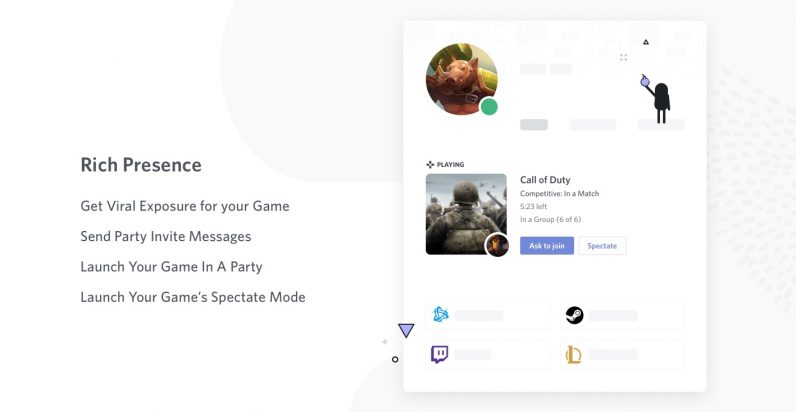 Voice client Discord today launched a new feature which will allow users to jump into their friends games with one button.

The new feature, called “Rich Presence,” is a developer kit that allows game developers to integrate more closely with Discord. Players can now participate in each other’s games using Discord itself, dispensing with the need to add each other on multiple different gaming clients.

When you spot a friend playing a Rich Presence game, you can pull up their profile — which will show you what they’re doing in-game and whether there are any open slots — and hit a button that says “Ask to Join.” Players can also send invites to other Discord users to join their games. These will automatically open the corresponding game client. If you can’t join, you can spectate their games from the Discord client.

It’s worth noting that this only works with features already in the games themselves. You can’t join a player’s game or spectate if their game doesn’t have multiplayer or a spectate mode, respectively.

Currently, the integrated game with the highest profile is Call of Duty: World War II. Other games include Killing Floor 2, Payday 2, and Divinity: Original Sin 2. That’s a lofty list, but it neglects some of Discord’s massive player bases for Overwatch, Player Unknown’s Battlegrounds, or Fortnite, just to name a few.

Still, if this takes off, it’d make Discord a central hub for multiplayer gaming across multiple different services. The chat client that was originally just an alternative for Teamspeak and Skype has come a long way.

Story has been updated to reflect new information.

Read next: Researchers find almost EVERY computer with an Intel Skylake and above CPU can be owned via USB