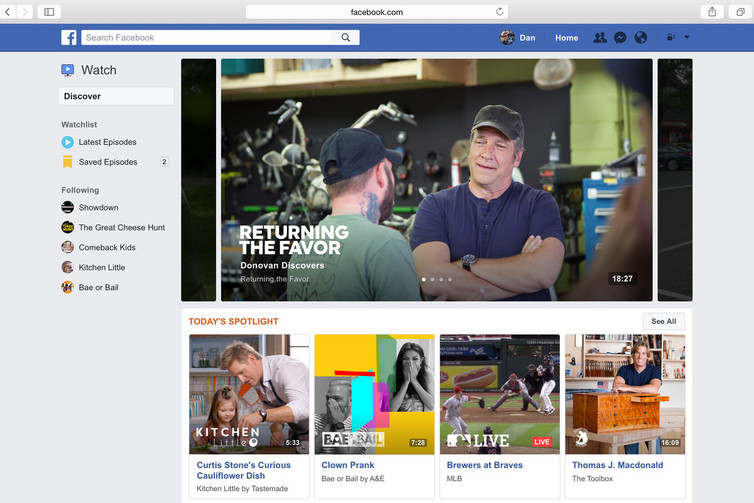 Facebook’s latest attempt to appeal to teens has quietly closed its doors. The social media platform’s Lifestage app (so unsuccessful that this is probably the first time you’ve heard of it) was launched a little under a year ago to resounding apathy and has struggled ever since.

Yet, as is Silicon Valley’s way, Facebook has rapidly followed the failure of one venture with the launch of another one by unveiling a new video streaming service. Facebook Watch will host series of live and pre-recorded short-form videos, including some original, professionally made content, in a move that will allow the platform to more directly compete with the likes of YouTube, Netflix and traditional TV channels.

Lifestage was just one of a long series of attempts by Facebook to stem the tide of young people increasingly interacting across multiple platforms. With Watch, the company seems to have changed tack from this focus on retaining young people, instead targeting a much wider user base. Perhaps Facebook has learnt that it will simply never be cool –, but that doesn’t mean it still can’t be popular.

Lifestage was intended to compete with the increasingly popular Snapchat, the photo and video-sharing app especially popular among teenagers. But the spin-off was never able to achieve the user numbers necessary to sustain the venture. Worryingly for Facebook, this is the third failed attempt to emulate Snapchat’s success among teens, following the short-lived Facebook Poke and Facebook Slingshot, which also came to quiet and unceremonious ends. Facebook has also incorporated several of Snapchat’s features such as its Stories function directly into its main app, to a lukewarm reception.

This comes as the social media market continues to expand rapidly. Competition is fierce and numerous established companies are vying with start-ups and rising brands to catch the attention of a growing and increasingly connected user base.

No longer do one or two companies hold a monopoly on the social media landscape. Most teenagers are increasingly using more than one platform for their online interactions (though noticeably this trend does appear to be somewhat different outside the Western world). Young people are experimenting with new formats and ways of interacting, from short videos and disappearing messages, to anonymous feedback apps such as Sarahah, the latest craze to explode in popularity and excite media commentators.

Yet despite these issues, Facebook is still the world’s most popular social media platform by quite some distance and has more than 2 billion users worldwide. Recent data suggests it is almost as popular as Snapchat among teens and young users, as is Facebook’s other photo-sharing app, Instagram.

The problem, of course, is that Facebook’s popularity – and, crucially, the platform’s simplistic and user-friendly design – means teenagers’ parents, teachers, bosses and even grandparents now also use the platform. For teens, that means the platform has become a headache of competing and conflicting social obligations, with various aspects and contexts of their life collapsing into a single space.

The young people I talk to for my research suggest that Facebook’s broad appeal and easy design presents a unique experience for them. Facebook is a field of potential social landmines, with the fear that the diverse user base will see everything they post – causing anxiety, hedging and inaction.

Having to negotiate this broad audience means young people seem to be less likely to use of some of the public aspects of Facebook, choosing instead to rely on aspects such as groups and private messaging. This explains why they seem to be increasingly relying more on platforms such as Instagram and Snapchat to interact with their peers, a trend also noted by other researchers.

In this light, the attempt to encourage teenagers to use the same features as they do on Snapchat when Facebook’s brand is so associated with a more public and socially difficult environment seems inherently flawed. We can’t say where the company will go in the future but it seems likely it will struggle to ever be as central to young people’s online social experiences as it once was.

Yet the launch of Facebook Watch suggests perhaps the company has learnt its lesson. The new service is an attempt to create a broader space that can appeal to their wide user base, rather than aiming content, ideas and spaces specifically at teens and young people.

With the announcement of the video-sharing service, Facebook has put out a call for “community orientated” original shows. It will provide users with video recommendations based on what others – and in particular their friends – are watching. In this way, Facebook Watch will allow users to find content that reflects their interests and friendships, whoever they are. Rather than attempting to retain and target a specific demographic, Facebook Watch appears to be acknowledging the platform’s broader appeal.

This seems to match Facebook’s moves away from being a pure social networking platform and towards a much broader one-stop hub for news and content. With the launch of Watch, users need never leave the walled garden of Facebook as they can view both content embedded from around the web and original videos hosted on the site. And with Facebook already ranked second only to YouTube for online video content, again this move looks like an attempt to cater to a much broader market than teens alone.

The fact that Facebook seems increasingly keen to nurture its more diverse user base is likely to be a continuing concern for young people worried about their interactions on the platform. But, on the other hand, given YouTube’s massive appeal to the teen market, Watch may serve as a way to entice teens back to Facebook. Really, there’s only one way to sum up young people’s relationship with Facebook: it’s complicated.

Read next: The weird saga of the "water bottle for Women in Tech" hoax