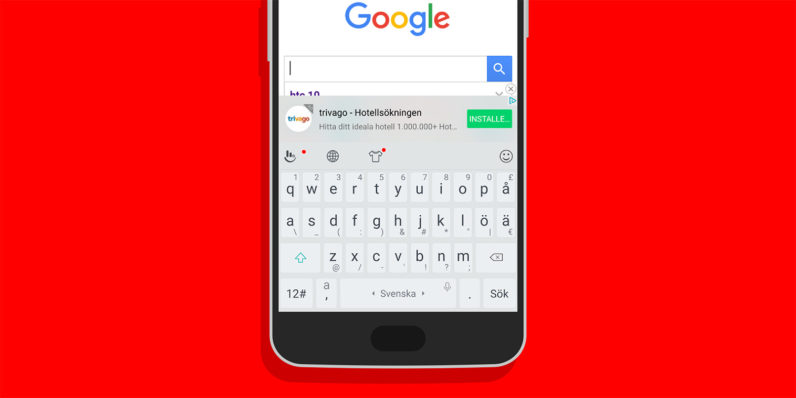 Over the weekend, Redditors aptly raged over the introduction of ads atop the default software keyboard on the HTC 10.

The annoying promo showed up on TouchPal’s keyboard app, which comes preloaded on some HTC handsets. It was apparently an error – HTC asked users to uninstall updates for the keyboard, and TouchPal is said to have apologized and explained that it mistakenly flipped a switch and enabled the ads.

Error or not, this is exactly the kind of user-hostile experience that developers should avoid at all costs. A keyboard already takes up about half of the display, and demands a user’s attention to get something done – whether that’s filling a form, sending a message or entering a password. Where’s the screen real estate and the headspace for an ad?

Of course developers should think about monetizing their products. But marring the core experience of your app with ads will sooner get you booted off your users’ phones than make you any real money. That’s especially true for keyboards, which are easily replaceable with innumerable alternatives from app stores on both Android and iOS.

As the folks at July Rapid noted in their guide to integrating ads in your app, it’s important to think about the intrusion factor when deciding on where to display ads, so as keep them from becoming less effective and more irritating than they can be. Plus, you can take cues from mobile games that integrate ads into the experience (show them during a natural break, like a timeout or when a player completes a level) to ensure your ads aren’t a pain.

Read next: Microsoft's new app guides you through indoor spaces without GPS