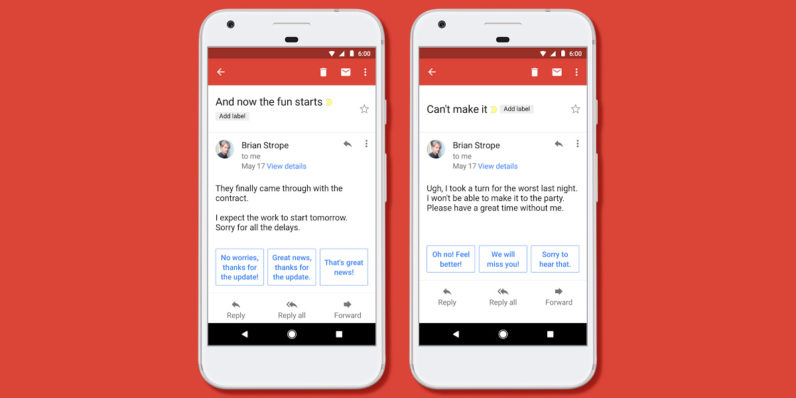 As is the case with most tech journalists, I receive between 50-100 emails a day, and my routine doesn’t allow for much time to tackle them all. Instead of getting better at responding to them over the past few years, I’ve developed a knack for quickly spotting which ones includes pitches and tips I might genuinely be interested in, and ignoring the rest. And I hate myself for it.

I even tried my colleague Matt Hughes’ method of using a text expansion tool for quick replies – but even that didn’t make much of a dent in my unread email count. But now, I’m glad to report that I’ve found something that works: Gmail’s Smart Reply feature.

It’s no longer brand new at this point: Smart Reply has been out for nearly a month on iOS and Android, and a previous version has been available in Google’s Inbox app for about a year. But it’s so effective that I find myself looking forward to using it, and not just ignoring emails like the inconsiderate rube most PR folks probably think I am by now.

The feature basically analyzes each message you receive and lets you choose from three contextually relevant replies to respond with, with just a couple of taps. It works great because of how smart Google’s neural network has gotten over time, and because it’s on my phone – which is where I scan most of the email that floods my inbox after my India Standard Time shift.

The folks at Google explained that its neural network system uses an approach based on hierarchical models of language, so it can recognize sequential patterns in the contents of an email and come up with meaningful responses.

It looks at whether the words in a message have a positive or negative connotation, and suggests replies with the appropriate tone. And over the past month, I’ve found this to work extremely well. Plus, the fact that you can edit or add to the recommended reply before sending means that you don’t have to worry about whether it comes across as too familiar or too terse.

A lot of people advocate sending brief replies, and I’m now totally on board with that: I’d much rather receive a short response than not hear from someone for days on end. And as ReviveYourInbox.com suggests – if you’re worried about sounding rude, you can always include a line in your signature that reads, “Please excuse my brevity, I’m trying to get better at managing my inbox.”

I’ve found that I now reply to at least five times as many messages as I used to. That figure varies from between 5-25 emails; it’s not close to the number of messages I receive, but a lot of them are impersonal or don’t warrant a reply. Hopefully, I’ll get even better at using this over time. Inbox Zero, here I come.

Read next: Join the Future of Energy: Apply to the 2017 New Energy Challenge