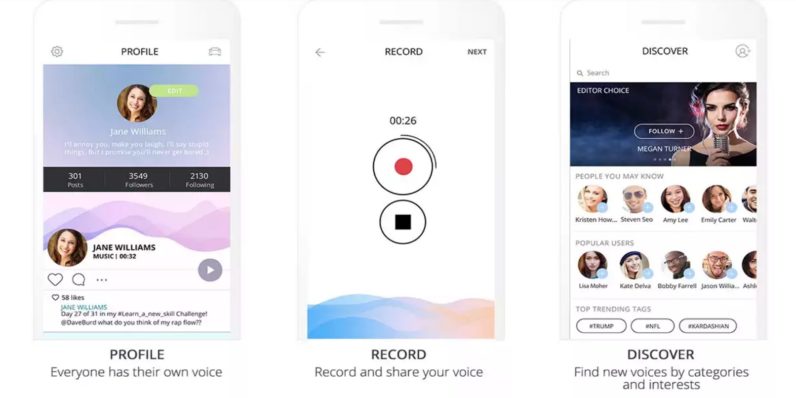 I had more fun with HearMeOut, a social-network built around 42-second voice recordings, than I’ve had with any other social media app to date, though I might be using it wrong. The app is designed to be the Twitter-for-voice, which I’ve heard before over the past few years.

The app appears, on the surface, to be intended for use by incredibly busy people who commute up and down the German Autobahn or the Los Angeles freeway. Which is something that doesn’t interest me; I don’t drive.

And sure, in some ways, that’s what it is for – the developers are proud to offer HearMeOut alongside services like Spotify in a deal with SmartDeviceLink Consortium that’ll put the app in cars made by Lexus, Subaru, Mazda, and others soon. There’s more to it than just a new way of ‘hands free communication’, though.

I didn’t care about any of that though — the characters I came across, in just 10 minutes of using the app, sealed the deal for me. I won’t be uninstalling.

Your mileage may vary

Downloading the app, which is free on iOS and Android, gave me the impression I was about to find out what the ‘audio’ version of rage-posts and cat-memes was. I won’t claim to have been disappointed, but what I found was much, much more.

It is a cinch to get right to the content – I linked my Facebook account and then tapped some of the tiny icons at the bottom of the home screen until I came up to a page with a bunch of hashtags. This was the place where I’d find out what was trending on HearMeOut – I wanted to see if this thing had a pulse.

The app treated me to a flow of politics, accents, music, rappers both awful and great. Most importantly I felt a tiny sense of humanity creep into my social-networking that disturbed me in a pleasant way.

How very intimate – in a world where swipe right and body-shaming are things, here’s a new piece of a person you can weigh in on guilt-free. Nobody has to know you listened.

A gentleman who was obviously from the deep south told listeners he’d vote for General Mattis in 2020 simply because “who wouldn’t vote for Mad Dog 20/20?” It made me spit out some of my coffee.

Then there’s the woman with an indiscernible accent who posts one sentence aphorisms like “better oops, than a what-if” who made me stare off into space for a few seconds, having been made wiser.

It doesn’t end; one woman posted her advice for not tossing people into the shelves when you go to Wal-Mart. Who can’t benefit from that?

Using HearMeOut is weird, and that’s good. We need weird. I’m tired of apps that don’t let me hear how crazy the rest of the world can be in bite-sized snippets that are really easy to access while my eyes are otherwise occupied.

The app doesn’t waste my time, it leaves that up to the people recording their voices. I say ‘the people’ because I wasn’t bold enough to record my dramatic recitations of famous 80s sitcom lines to share with the rest of the world.

Underground rappers and bedroom news-anchors of the world unite: your app is here.