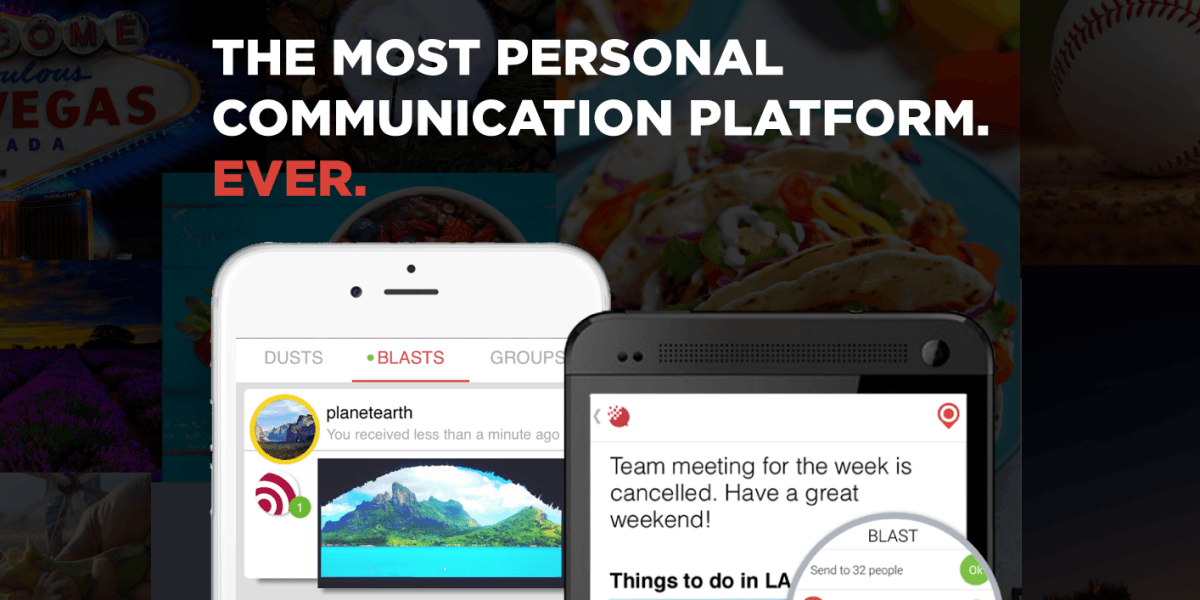 Cyber Dust (iOS and Android) was an enigma for me. I tried it and just couldn’t quite get the feeling of just what the service was, and what it hoped to accomplish. Call it the blight of a post-30 tech reporter, or perhaps an identity crisis by Cyber Dust itself.

Never before had I used an app that I struggled so much to stuff into a neat little box. Was it supposed to be like Facebook? Twitter? Snapchat? Wiper? The latter is probably the closest “fit,” but truth be told, it’s really something else entirely.

I believe that in my struggle to find a way to describe Cyber Dust, I actually lost its meaning altogether. But I think I’ve got it now.

Mark Cuban once had a very public hearing with the SEC that he eventually walked away from after “kicking their ass all over.” During the hearing, Cuban basically had to sit idly by as messages he once thought were private were broadcast to the world. If that’s not a good reason for creating an app like this, I’m not sure what is.

With texts, emails, snaps, tweets, you lose control and ownership of the message the minute you hit send. The person you send it to, or the platform takes ownership, forever

It’s not an issue because Cyber Dust is built with security in mind.

Messages never touch a Cyber Dust server, nor are they stored on a device. Instead, they’re encrypted end-to-end and then deleted just a few seconds after being read.

Since Apple doesn’t allow developers to disable this feature, iPhones and iPads do have the ability to screenshot, but you’re told beforehand if the user you’re “dusting” with has this ability (the lightning bolt in the screenshot below). If they do screenshot the conversation, you’re notified instantly, ala Snapchat.

But here’s where the magic happens: the screenshot doesn’t contain any identifying information. In fact, just now I tried this out with Mark Cuban and as you can see… nada.

Once I tried to stop making it fit in a box, I loved it

At its core, it’s clear that Cyber Dust excels as a tool for real-time conversation. It has other functionality, like a timeline to share “blasts” with the public, but I have mixed feelings on this.

It’s not at all pretty, but it is as Cuban puts it “a faster and more productive means of keeping up with news and topics I’m interested in.” I’d describe it as functional, but completely unremarkable.

But as a tool for conversation and engagement, Cyber Dust excels.

“I don’t do much on Twitter because of the trolls,” says Cuban. “On Facebook, you don’t know if you will even reach the people you want to reach.”

Instead, Cuban — who once chatted with fans on Twitter during every episode of Shark Tank — has taken his engagement efforts to Cyber Dust.

I respond to hundreds of people a day because it’s private and between us.

[…] People are more open and honest when they communicate with Cyber Dust, because they know their messages disappear forever.

Privacy is also a great way to kill trolls.

Trolls feed on attention, and when you send a message to one other person — and it disappears within seconds — there isn’t much attention to be had. It opens up a whole new line of authentic conversation between you, and others, without the fear that an internet blowhard is going to jump on board hoping for their 15 minutes of fame.

I’m now a fan — and active user — of Cyber Dust

For me (+bryanclark), outside of the privacy elements, engagement makes the app worthwhile.

With less than 300 followers, I’ve already had messages with a reach of more than 20,000 dusters (users). Even those that don’t strike a sort of viral nerve are at least delivered to all of your followers, and they don’t disappear within minutes like on Twitter.

You may not engage 100 percent of your audience, but you at least give them the option.

As for what’s next, Cuban detailed a plan to update the app, create a Web version and add integrations to external sources to further extend its functionality. I’m excited for all of those things, and I’d perhaps add some additional on-boarding. I can’t be the only one that didn’t know what they were “supposed” to be doing.