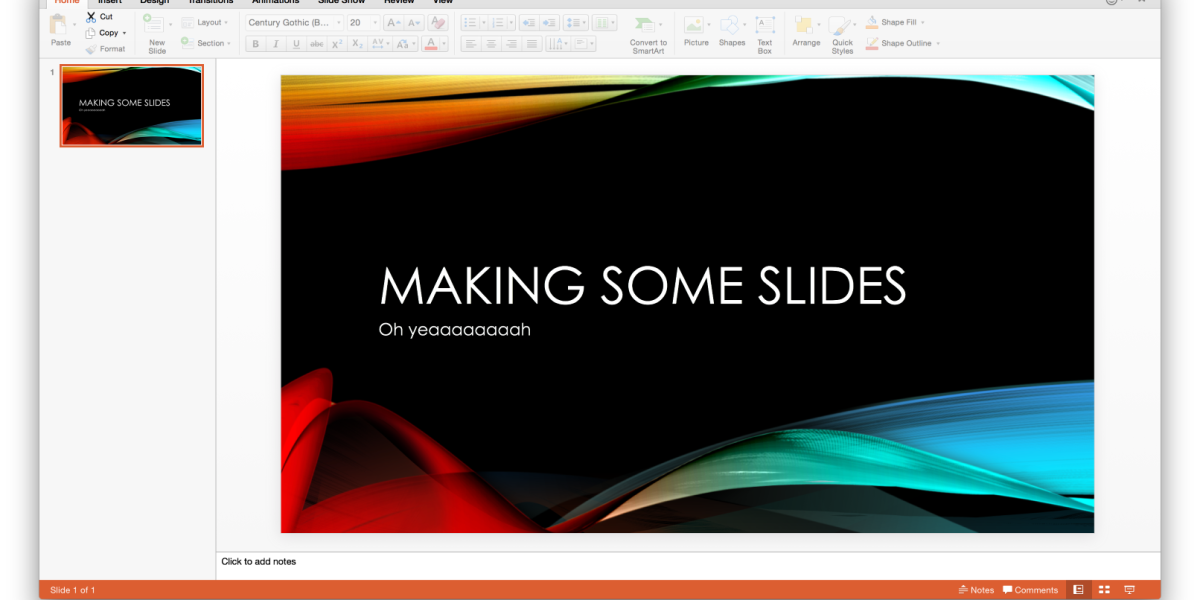 Microsoft’s plan to broaden the appeal of its subscription-based Office 365 service took another step forward today with the official launch of Office 2016 for Mac.

Already available across Windows, Android and iOS devices, the introduction of a new version for OS X – the first in five years – brings a wealth of new features and a modern look and feel.

Among the updates are new versions of Word, Excel, PowerPoint, Outlook and OneNote.

Some of the changes apply across more than one of the apps. For example, the redesigned Ribbon brings the Mac versions in line with the appearance of the iPad and Windows versions, and there’s a new task pane to help simplify complex tasks, like formatting images within Word, designing animations within PowerPoint and inserting formulas in Excel.

Despite aiming to keep a familiar feel across platforms, Office 2016 has support for some Mac-specific features too, like multi-touch gestures, Full Screen view and high-res Retina-ready rendering.

Aside of the visual overhaul, one of the key new features here is the Design tab, which lets you apply layouts, colors and fonts throughout your documents.

It also supports threaded comments for feedback and supports simultaneous editing with teammates if more than one person is working on the same project.

OneNote is a new addition for Office for Mac, and just like on other platforms it offers cloud-synced, collaborative note-taking options accessible from any device.

There’s integrated search that tracks tags and indexes typed notes, plus you can also use image recognition to pick out text in hand-written notes or images.

It might not be a full-fledged document editing experience like Word, but you can still modify text styles, insert notes, tables or pictures and share OneNote documents directly with friends or co-workers.

With a number of under-the-bonnet improvements as well as a visual redesign, Excel for Mac will now do things like recommend the best type of chart for you based on the data you’re working with.

It maintains familiar keyboard shortcuts, but there’s a much-improved formula builder to save time when creating a new spreadsheet or entering masses of data.

Major change is to presentation view to work in the same way as Windows, so all supporting materials now sit on the laptop while presenting on big screen.

There’s a new animation pane to help you design and fine-tune animations, and some new slide transitions.

You can also now preview the contents of a message or any attachments without fully opening it, allowing you to better manage your time spent responding to emails, in theory.

The ethos behind the ‘Office everywhere’ strategy is to provide the exact same experience and features regardless of which device you’re using to access the apps. With the Mac version now up to date, it’s a narrative that begins to make a lot more sense alongside its other platforms.

However, the update doesn’t just mean a new version of Microsoft’s Office tools for Mac users and then nothing for another five years; it also brings a pledge of “at least quarterly” updates, according to Richard Ellis, UK lead for Office at Microsoft.  This should mean more bug fixes, more optimizations and regularly delivered new features as part of the incremental update strategy.

General availability follows a four month preview period, which has seen 7 major updates based on over 100,000 pieces of feedback from preview testers in the Mac community.

The new Office 2016 for Mac is available to download now in 139 countries and 16 different languages.

To get it, you’ll need to be an Office 365 subscriber (Home, Personal, Business, Business Premium, E3 or ProPlus) or if you’d prefer to buy it as a one-off purchase, you’ll be able to buy Office 2016 for Mac as a standalone in September. There’s no word on pricing for the ‘boxed’ option though.

Read next: Trackbuster stops people creeping on if you opened an email or not