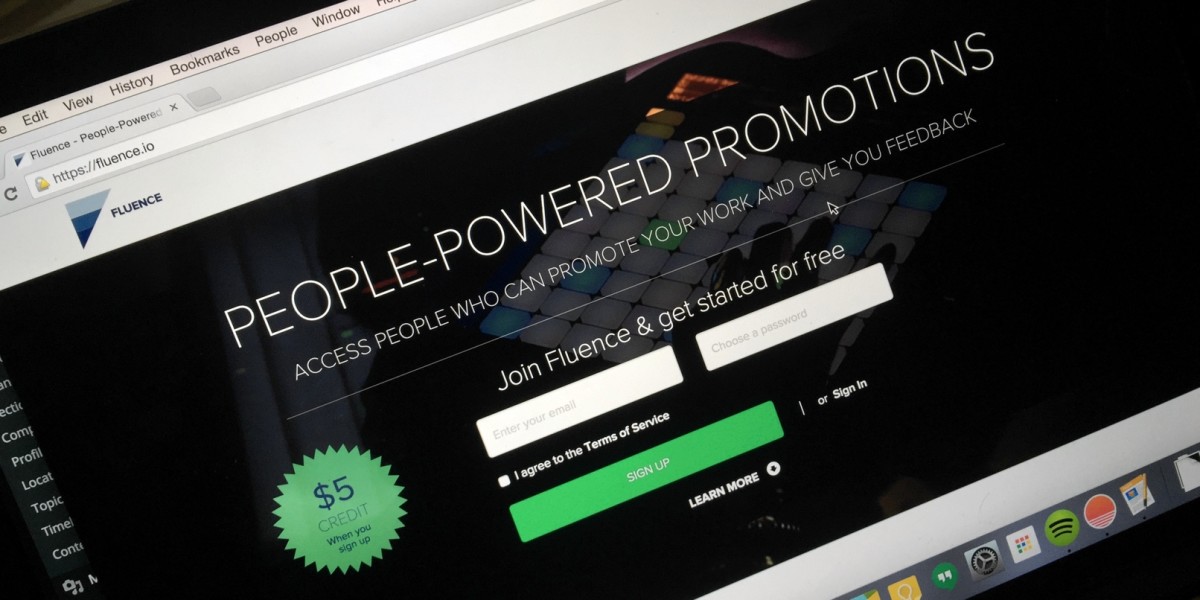 New technology makes it increasingly easy to produce and promote music, film and other creative works. The downside is that artists now face a vastly expanded field of competition so it’s no easier (and maybe even harder) to get noticed by key influencers with their overflowing inboxes. Fluence is a product that may have cracked that problem.

A two-sided marketplace, Fluence gives artists an easy path to journalists, DJs, producers and other experts, while serving as a filter for the number of pitches those experts have to deal with.

The magic ingredient? Money. While ‘pay for access’ models tend to leave a bad smell when applied to the world of emerging artists, it serves a useful function here. Creators can pitch any expert they like for free but if they get a response, they’ll have to pay for it. The exact amount is set by each expert, with prices currently ranging from a couple of dollars up to nearly $100. Fluence takes a 20 percent cut from each transaction.

The benefit for artists paying is that they have a good chance of getting honest feedback on their work. Fluence founder Shamal Ranasinghe, who previously started music services company Topspin, says that in addition to giving experts an extra revenue stream, this is about encouraging them to spend more time on the feedback they give, increasing the value artists get from the service.

Artists can rate the feedback they receive, so any experts abusing the system risk being removed. Experts, who are currently handpicked by the Fluence team, don’t have to keep the money they collect if that makes them feel uncomfortable or it’s against their professional ethics – there’s a charity donation option too.

I decided to put Fluence to the test, both as an ‘expert’ (hey, I ran a music website when I was at university) and as an artist.

My experience as an artist on Fluence took me back to the days when I was serious about getting noticed for my own music. I still produce songs when I have the chance, so, heart in mouth, I put one of my most recent recordings up as a sacrificial lamb. You can only post one song per submission, and SoundCloud, YouTube, Bandcamp, Kickstarter and Vimeo URLs are all accepted. After putting together a short bio and description of my music, it was time to pick which experts to pitch.

Fluence has over 1,200 experts on its books at the moment, and you can search through them by social reach, cost and relevance to your music.

I decided to pick 11 of the most relevant experts, an order that (were they all to respond) would cost me $102.90.

And then the waiting began. Although I make my music for myself and I’m not massively bothered how other people feel about it, I was suddenly intensely aware that the people I’d selected, including an LA radio DJ, a synth-pop musician and an indie record label boss, could be judging me right at that moment.

The first responses came in within a couple of hours and more followed over the next few days. To my relief, most were reasonably positive, and some included constructive feedback about production techniques and the kind of information I should include on future submissions.

One guy, who clearly fancied himself as something of a Simon Cowell figure, wrote perhaps the most scathing review of my song possible. It was so trollish that Ranasinghe emailed me to apologise and to note that this person had slated practically every track he’d been sent. This is where user reviews of the experts come in handy, and Ranasinghe told me he was considering kicking this particular individual off the platform.

On the other hand, one person (thanks, Brian Hazard!) liked my track enough to share it with his 1.38 million Twitter followers, which got me some additional attention on my SoundCloud account.

When I was really serious about my music a few years ago, I’d have found Fluence incredibly valuable. Getting the attention of people who can help your career as an artist can be really hard, and I’d have happily thrown a few dollars at this service to get regular feedback that may have helped me find a ‘big break.’

So I could see things from the other side of the fence, Fluence set me up as an expert. Not wanting to rip anyone off, I made sure my profile was clear that I’m not a music journalist and I can’t make anyone a star, but I was happy to give feedback anyway. I tagged my interests as ‘electro pop’, ‘indie electronic’ and the like, and waited to see if anyone would care enough to ask for my opinion.

After a couple of days, a trickle of submissions started to come my way. These usually contained music that fit my interests, but the occasional metal track made it in from people who perhaps didn’t read my profile or just wanted anyone at all to listen to them.

Experts have two weeks to listen to any track submitted to them, although I tried to be as quick as I could, catching up on new submissions every Saturday afternoon. The feedback process was simple; I had to listen to the track (or in some cases watch the music video) and then click whether I liked or loved the song, or if it was not for me.

After that, there was a field to fill in where I could offer a more detailed review, plus the opportunity to recommend it to other experts on service. And that was it, job done, money in the bank (well, in my Fluence account, anyway).

While the feedback process is simple, I felt a little awkward about clicking ‘play’ on the two metal tracks I received. As soon an expert starts listening, the review process begins and the artist starts paying. I don’t like metal and probably couldn’t tell a good track from a bad one; an option to say ‘Sorry, I’m not going to listen to this because I don’t think I’ll be a good fit for it’ would perhaps be a wise addition. Instead I just left those tracks unplayed until the review period expired after two weeks.

The future of Fluence

The team behind Fluence is spread around the world, and this is very much a part-time passion project rather than a play for a billion-dollar exit; Ranasinghe himself has just taken on a role at Pandora as VP of Music Maker Product Management. As a result, it seems unlikely that there’s going to be a major push for growth any time soon.

If, however,Fluence has enough time and money put into it, there’s potential for it to be a real force for good in the music industry and other creative sectors. In fact, the site already has fashion, tech and film listed on its homepage. Ranasinghe says that brands, film makers, tech startups, fashion companies, and consumer device products have all used Fluence to promote their videos.

It’s optimized for media submissions right now though, so I wouldn’t recommend promoting your tech startup through it just yet. The tech list of ‘experts’ on Fluence currently features 38 names including me, San Francisco VC Hunter Walk, Fortune’s Mathew Ingram and that semi-fictional sage Fake Grimlock. However, the site isn’t really optimized for non-music submissions. Ranasinghe says that in around a month, the site will support a wider range of submissions, including pictures, websites, PDFs, recipes, resumés, and Etsy pages.

For now, there are no doubt many thousands of artists around the world who could get a lot of benefit out of Ranasinghe and his team’s part-time endeavor. They just have to discover it.

Read next: The complete Twitter guide to the faces behind Apple Music