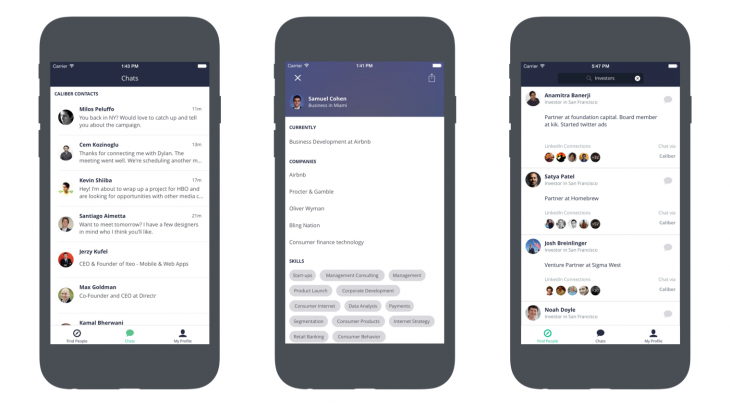 There’s been a lot of ‘Tinder for X’ companies over the past few years – I wrote about another one yesterday – and Caliber started out like that last year.

The original version is still in app stores but Blank and his co-founder Chris Calmeyn took the insights they got from its users and built an entirely new app for Android and iOS.

Caliber connects with your LinkedIn profile, imports your contacts, asks you for your interests and suggests relevant professionals you might want to connect with.

When the person you contact isn’t using the app, they’ll get your message request through LinkedIn. If they are, it’ll pop up in the app. If they respond, you’re added to their contacts. You’ll then get push messages when they reply to you.

If you’re like me and find LinkedIn a bit of an intimidating swamp, Caliber’s approach to contact requests is refreshing. They appear in the app but you’re not notified in real-time. You can respond to them at your own pace and will receive an email once a week with a ranked list of the people who contacted you. Requests you don’t get to will automatically disappear after two weeks.

While Caliber currently requires you to sign in with LinkedIn and is heavily reliant on the business social network, it won’t be stay that way. Blank says the company will add the ability to connect other platforms including Twitter, Angel.list and Dribbble in the near future.

He also has bigger plans beyond simple text chat: “We’re looking to partner with events and allow people to communicate with other attendees. We want to facilitate rich communication – video, file transfers, setting up meetings through the app.”

Even now, limited to text, Caliber will definitely appeal to people who are trying to network online and don’t enjoy tussling with LinkedIn’s InMail system on mobile.

When it comes to recommendations in the app, Blank says it draws upon your social graph and where you have connections, but also goes beyond that:

“If someone has been contacted a lot, we can confidently say they are a high quality contact in that category. We also take your location into account and try to show people near you.”

Given LinkedIn’s recent moves to restrict its API, Caliber is smart to be planning integrations with a wider set of services. It’s a well designed app, which actually makes ‘reaching out’ (that horrible phrase) to potential contacts a lot easier and more enjoyable.

Read next: Choosic is quite literally Tinder for tunes