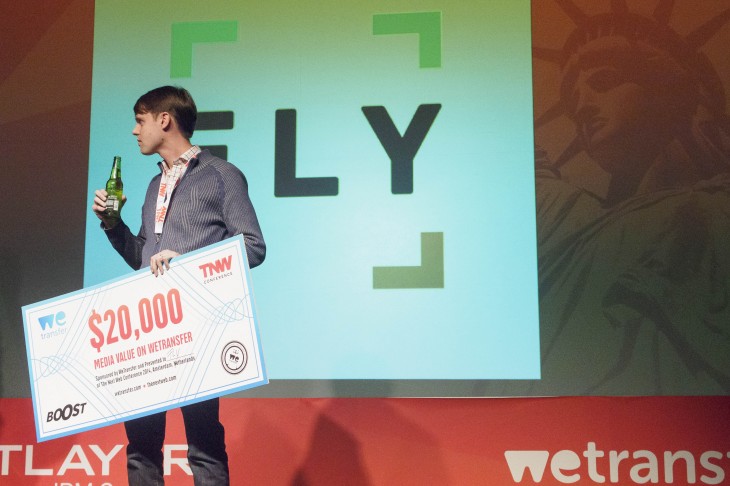 After being selected from a pack of 48 startups to present with the final 16 startups on stage at The Next Web USA Conference — cohosted by WeTransfer — editing-app suite startup Fly Labs has been crowned the Boost champion of the conference.

The startup has built three apps to help make video editing easier on the iPhone. The first app, Fly, lets you use gestures to edit videos in real-time. Tap to cut, swipe between clips to dissolve, and tap and hold on two clips at once to create a split screen effect. The app is so easy and fun to use it was named one of the Top Apps of 2014 by Apple.

The Crop app fixes one of the biggest video shooting problems of the smartphone era, footage shot in portrait mode. The app creates a wide-screen crop of a video so you can share your videos with others without being mocked by your friends.

And launched today, the Clips app makes editing multiple clips dead simple by stacking the clips instead of cramming them into a timeline. You pull in the end handles to adjust the length of each clip and you can easily reorder the clips by dragging up and down the list. The video at top plays first and each clip immediately under it plays next and so on. You can add voice over and music as well.

All of these apps actually take existing workflows and either simplify them or fix an actual problem. The judges found the apps to be beautiful and the company had the best presentation. Plus, with the popularity of photo editing suites like VSCO, the apps seem like they will do well on the market.

In fact, one of the judges — Marvin Liao of 500 Startups — wished he had invested on the company. In other words, there’s something there that hits all the key points of a startup that has the potential to grow and make a dent in the market.

Read next: Minecraft lands on Windows Phone for the first time