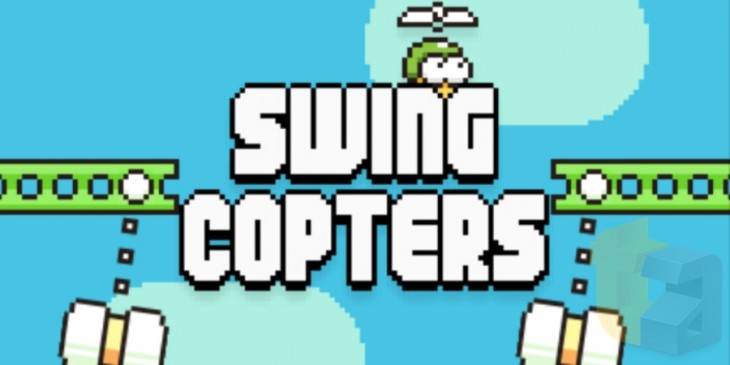 Dong Nguyen, the man best known for creating the hatefully-addictive Flappy Bird game, teased details of his new game earlier this week, and now Swing Copters has landed on iOS and Android.

Dong’s latest bid for your sanity is much like Flappy Bird. Rather than navigating a bird sideways, you are tasked with guiding a cute little helicopter’s upward flight while avoiding pairs of hammers that swing from each gate. Like Flappy Bird, you get a point for every gate that you pass through.

The copter flies from side-to-side automatically, but you can change its direction with a tap. That means lots of tapping to get past the series of gates and hammers. Once the copter gets moving in a particular direction, it becomes harder to regain control of its flight path — as I quickly found out.

I gave Swing Copters a go with my low-scoring first runout. The game doesn’t feel as addictive as Flappy Bird, it loses originality points because it borrows so many of the same dynamics. But once I picked up the basics I had that frustrating and recurring urge to hit the play button again in a bid to beat my terrible high score of just four. (I’m SURE all of you can do A LOT BETTER.)

Like Flappy Bird, Swing Copters is monetized using in-game advertising. That formula served Dong pretty well last time — he’s said to have earned as much as $50,000 per day from Flappy Bird — and it will be interesting to see how the game gets on, both in terms of attracting users and making money.

Also worth watching is Dong’s own reaction. The Vietnamese developer pulled Flappy Bird after the side-effects of its popularity became too much to handle. He claims he had problems sleeping, such was his stress at people spending so much time addicted to the game.

Go ahead and check it out via the links below. We’d like to take this opportunity to just remind you that there are more important things in the world than mobile games, so try not to get too involved in this one. Got that? Okay?