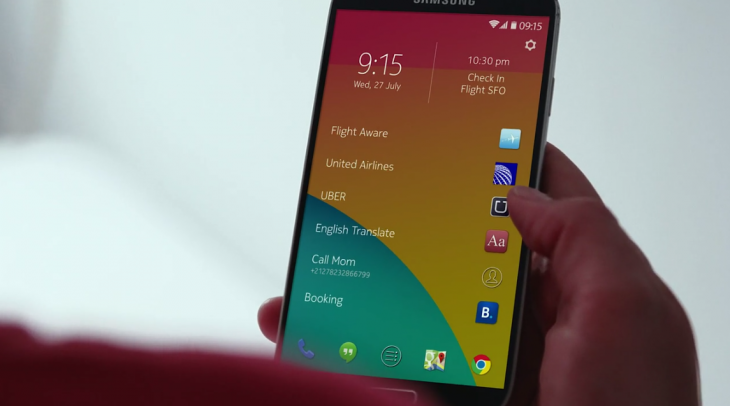 Now that its Devices and Services business is owned by Microsoft, Nokia is able to experiment more freely in the mobile space. One of its first big moves since the acquisition is Z Launcher, a new third-party Android launcher similar to Aviate, Cover and EverythingMe.

Alongside the traditional app dock at the bottom of the screen, it shows the time and date in the top left-hand corner, as well as your next calendar appointment on the right. The bulk of the screen, however, is a list of shortcuts to frequently used apps, contacts and websites. The promise, according to the company’s promo video, is that the new Android launcher will learn your preferences over time and show the apps and tools that you need most often.

“Throughout the day, Z Launcher is learning how you use your phone and promoting your favorite apps so you can get to them faster,” the team says on its official site. “Whether you’re texting a certain someone, trying not to search for apps in the car, or multi-tasking at the office, your screen changes based on your everyday life. The more you use it, the better it gets.”

To quickly find what you’re looking for, Z Launcher supports swipe-based character recognition. So if I drew an “S” on-screen, it would probably show Spotify, Skype and Songkick, contacts that share my surname and a link to sbnation.com. You can also write multiple characters to return specific apps. If you wanted Snapseed – but it didn’t show up straight away – you could draw an “N” after the “S”, and Z Launcher should refine its search results.

The bad news? Z launcher isn’t available in the Google Play store yet. You’ll need to sign up for the “limited pre-beta release” on its site and download it from there. Be warned though – the team says it’s “scaling out slowly” and may run out of download slots on its site. TNW has tried to access the beta from a number of Android devices, but we’re yet to strike gold.

Read Next: 11 of the best Android launchers and home screen replacements you can download today

Read next: Skype updates iOS app with focus on helping you delete messages and chats