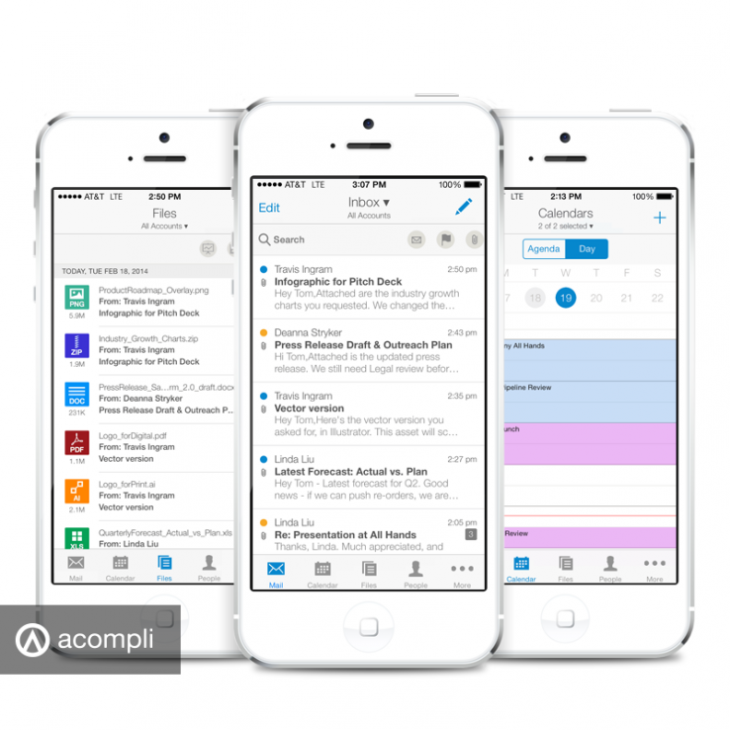 I hate email. The team at The Next Web can attest to just how often I complain about email. Email is slow, cumbersome, often overwhelming and hard to deal with. There’s just so much of it. I’ve always been bad at email and despite great solutions like Mailbox existing, I’ve never found the perfect iOS email client.

Up until recently, I’ve been using the built-in iOS email client to get mail from my four Gmail accounts, mostly because the Gmail app lacks a unified inbox (it’s also pretty slow) and Mailbox, while useful, lacks a desktop app (there’s a beta coming soon) which makes the workflow a little painful.

Acompli, which was announced just a few days ago, set out to make “a better mobile email experience for business professionals” because it believes that mobile email hasn’t improved much since the iPhone launched, which is more or less true.

The app is compatible with both Gmail and Exchange accounts and it aggregates all your inboxes into a singular place, which is a great start. Being able to tackle everything in one go is important, especially when you get a lot of email. You’re able to switch between inboxes if you wish, too.

In your inbox, you’re able to fast swipe emails into your archive or slow swipe them into the trash, just like in Mailbox, encouraging you to action your emails right there. There’s also thread view for messages, something that every modern email app should support.

The app itself is tastefully designed; minimal and attractive and easy to use, but borrows many elements from other email apps you’re used to, such as Mailbox’s triaging and Gmail’s avatar conversation view. This is part of the reason the app is so easy to use – it’s familiar, but different.

Acompli’s email capabilities are good — perhaps what you’ve come to expect from your standard email client — but isn’t where the magic lies. The most powerful part of Acompli is that it also integrated contacts, calendar and attachment organization; it’s your one stop shop for staying organized.

The best thing in Acompli has to be that calendaring and location sharing is built right into new email composition. Location sharing is just that, when sending an email, hit the marker icon and Acompli embeds a pin of your location so you can meet up. Simple, but I can imagine it being extremely useful.

Additionally, if you’re emailing someone and you want to book a meeting with them, you can hit the calendar icon to quickly pull up your calendar in the app (rather than switching over to the calendar app) and quickly create an invite, or, suggest times that are available and let the recipient pick a time that suits.

You’re able to manage your full calendar inside the app, completely negating the need for the iOS calendar app, as well as maintaining your contacts stored in your email account. By putting it in one place, it makes everything easier to tackle. Why use three apps when you can use one?

Acompli’s a one-stop shop for everything productivity, but it’s also dead simple. There aren’t a million complex calendaring options or contact management settings, but it does email, calendar and contacts incredibly well for a singular app. It even made me set more calendar appointments, since it’s right there in the app when you’re emailing.

The company has spent a lot of time focusing on speed, too, and decided that the email protocols that exist (like IMAP and Activesync) aren’t mobile friendly, are taxing on the battery or just generally slow.

Instead of using these protocols, the service proxies the email through its own servers, rather than Gmail’s. In an interview with TechCrunch, the CEO pointed out that all data is encrypted in transit and the app doesn’t store credentials on your device. Still, this could make many businesses wary about using the service.

The price of free

What’s not clear right now is how Acompli is planning to make money. The company raised a $7.3 Million Series A in February and it was reported in February that the app will likely be freemium in the future (assumably making use of in-app purchases), but for now, it’s completely free, and extremely good.

Despite this, I’m a little apprehensive about giving all of my email to a third party, without paying them a dime. There’s always the worry that if I’m not paying them money, they could use my data to profit from it. Many are likely to feel the same way, and I’m left wishing that Acompli would just let me pay for the service or its app, to know that I’m not the product.

Despite this concern, Acompli actually made me hate email slightly less, which is more than I can say for many email apps.

The company says that users have previously “[preferred] to deal with it when they’re back at their desktop or laptop computer” because mobile email is too hard. I’d agree, having been a diehard desktop email person, but with Acompli’s new app, email on the go is actually easier to tackle than ever before.

The most surprising thing about Acompli is perhaps the fact that it took this long for someone to make an email app combine all the normal elements of business productivity into an app so seamlessly.

Read next: Should you make your salaries public?