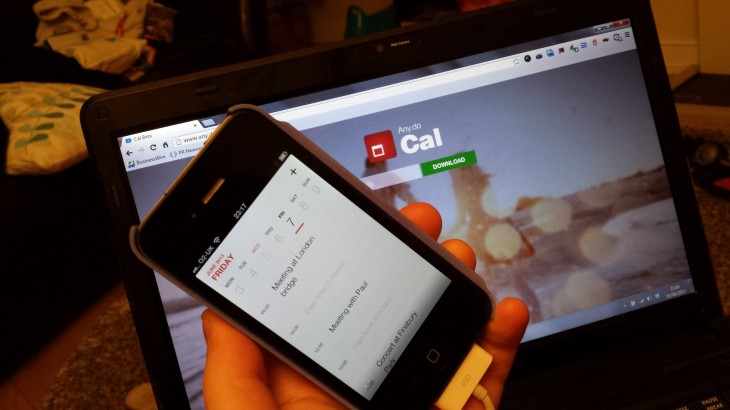 To-do list startup Any.DO is spinning out a brand new calendar app called Cal, which represents the “first in a suite” of standalone apps from the Israel-based company.

This news falls less than a month after Any.DO raised a $3.5 million seed round, and a year-and-a-half since we first described it as the only productivity app you’ll ever need. Indeed, Any.DO is a beautifully simple app that has won the hearts of many to-do list aficionados, so we’re excited to see what’s in store with this latest offering.

Cal is still currently in private beta and remains invite-only for now (sign up here), but it’s expected to launch fully for the public later this summer. However, The Next Web managed to grab a hands-on with the app and, well, here’s what it looks like.

First up, Cal is tightly integrated with Any.DO and as such you’ll be asked to sign-in to your Any.DO account. It will also ask you to import existing calendar events and contacts from your iPhone, so when you first launch the app it’s pretty much good to go.

The main calendar area is kitted out with photo-base themes which you can alter in settings – it would be nice if users could select their own photos, but as things stand you can choose from nine themes from art and food, to animals and illustration.

To view the calendar full-screen, simply pull it down from the top.

To add an item to your calendar, hit the little ‘+’ button and then enter a name for your event. Here’s where things start to get smart – it also asks to use your current location, so it can deliver ‘smart’ details for each entry. For example, if you enter a location name such as ‘Concert at Finsbury Park’, Cal detects it. It will even plot it out on a map for you and offer to help you navigate your way to any event.

Similarly, if you’re meeting somebody, you can opt to add a location (e.g. ‘London Bridge’) and tell it whether it’s at a residential or work address, restaurant, coffeehouse or bar. Then, when you start entering a specific name of, say, a restaurant it will serve up the options in real-time based on what you’re typing.

You can also add notes to each meeting, include attendees from your contacts and send them all an invite to the meeting.

Cal follows a very similar design ethos to that of Any.DO, it’s very smooth, clean and generally a delight to use. It’s the little details that really make it stand out – for example, when on a specific day in your calendar, you can swipe left and right to move up/down the month in question, with a neat transition marking the change in days.

Cal is vying for a market currently occupied by the likes of Tempo (previous coverage) but, based on our initial tinkerings, we can’t wait to check out the final version when it hits the App Store later this summer.

With its recent funding round, Any.DO is now ramping up its offerings and grow beyond a simple to-do list app. As with Evernote, which has branched out into separate standalone apps such as Evernote Food, Any.DO is striving to build a business centered around productivity – it will be interesting to see what’s next in its suite, though we do know it’s currently building an HTML5 version of its flagship Any.DO app for the Web.

Even before now, Any.Do has been busy iterating – back in October it updated its Chrome app to let users create to-do lists directly from Gmail. Then, earlier this year, the company introduced Any.DO Moment for iOS and Android, a feature which serves as a daily planner to manage your most pressing tasks and deadlines in a single screen.

You can sign up to join the beta brigade on the link below. Oh, and don’t despair if you’re not on iOS – we’re told an Android incarnation is in the works too.

Read next: Evernote adds custom reminders to its collaborative note-taking app on Android