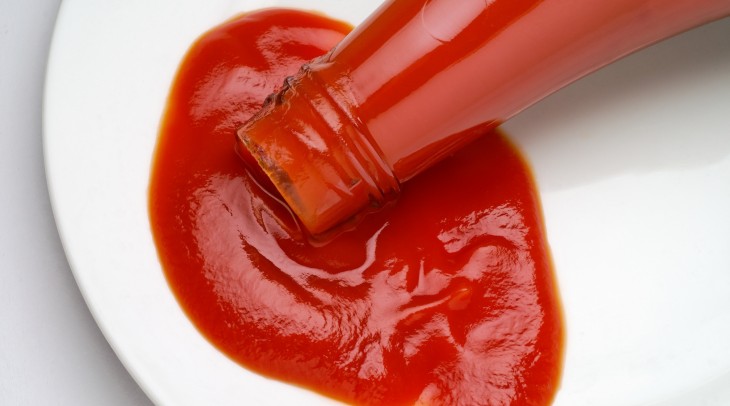 “Let’s hang out sometime.” We’ve all probably lost count of the number of times we’ve uttered the phrase, or something similar to it, and never actually followed up on it. While we can chalk many of those instances to a bit of insincerity, a new iPhone app called Ketchup wants to help you actually follow through with your friends.

If you haven’t caught it already, Ketchup’s name is a pun on wanting to “catch up” with friends. Developer Matt Capucilli, the original co-creator of the Video Time Machine app, has dribbled the pun pretty deeply into the design of the app, as it employs a familiar red color scheme and pending activities (“ketchups”) are kept in a table section.

To get started with Ketchup, simply login to Facebook and then choose a friend you want to do something with. The app comes with a few standard presets (hang out, coffee, lunch) and an extensive list (from aerobics to yoga), or you can just specify a custom activity.

When you’re ready to send the invite, you can contact your friend via Facebook message, SMS and email. Once accepted, the ketchup will be added to your table until you either “flake out” and cancel the proposed hangout or check it off as completed.

A Web app makes it easy for friends to accept invitations even if they don’t have the app. One concern I did have, though, was that users were sent custom links to an invite page. The information isn’t particularly sensitive, but theoretically, someone could randomly guess your invite and find out what kind of trouble you and your friend are getting up to. Not a major privacy breach, but I can think of a few situations where things could get awkward.

Ketchup has a very simple design, almost overly so, as there’s not really much more to the app. You can add events to your calendar, but it’s not really intended for scheduling these activities, simply logging and reminding them.

Capucilli said in an interview that he took a look at the social planning space and found it to be quite underdeveloped. While he viewed the business and dating markets as flooded, he didn’t see any App Store apps that had gained traction by just focusing on friends hanging out.

He went on to note that he had intentionally removed the scheduling aspect because it’s an area where apps have failed in the past.

When I mentioned that scheduling is one way to help turn vague interest into actual plans, Capucilli pointed out that having it on the calendar doesn’t guarantee that it happens.

“This is a new protocol. It’s a new way of organizing your social behavior. If you don’t want to enter into an agreement to do drinks with someone, then you don’t have to agree with it.”

I asked if the use of the phrase “flake out” in the app was meant to cause a bit of shame on either side to push them to actually moving forward with plans, but Capucilli described it as more of a reversal of power. According to him, the app gives people whose friends keep flaking out in real life an opportunity to take action virtually.

Capucilli pulled the app together in about six months with the help of a couple other programmers, and he has big ambitions for it.

“We’re going for a huge play here. We want everybody to use this application,” he said.

Of course, he’s also interested in profiting from the endeavor. If Ketchup takes off, it could be a prime opportunity for targeted ads and deals. After all, users are expressing a committed interest to do a certain activity, which should result in an extremely high conversion rate.

“In Ketchup, at any given time we have a snapshot of everything people want to do. Because of that, we can inject a sale, deals, suggest venues, sell goods…The real core understanding is that advertisers want to know what people are going to do ahead of time.”

I asked whether Capucilli was worried about building his service on top of Facebook and having it replicated by the company.

“It has crossed my mind,” he replied. “The only thing you can do to prevent that is make it really awesome. So much care has gone into this app that i think it’s defensible.”

He went on to note that he believes it’s “slightly outside of Facebook’s jurisdiction.”

“[Ketchup] is a much deeper connection than just friending someone on Facebook…It’s for the people you want to spend time with. It’s more about your core friends and your real-world friends.

Still, he thinks Facebook is the best option for what the company’s trying to do.

“The fact remains it’s an amazing platform…We’re proud to use it,” he said.

The Facebook integration is critical for Ketchup’s usability. The friends I want to see in real life are a small subset of all my Facebook friends, which includes people that I don’t know very well or am no longer close with.

There’s room in my life for an app that helps me remember to schedule all the social activities that I’ve wanted to do with others, but I’m not yet convinced that Ketchup is the app for that. It’s cleanly designed and works well, but I can’t shake the feeling that it adds another layer to an already difficult process. However, that might be because the app just launched so this hasn’t worked isn’t way into general use.

Ketchup does have the potential to be a really fun and helpful app if some of my friends also get in the habit of making “ketchups”. In the meantime, I might just have to keep stalling on all those engagements that I’ve been putting off.