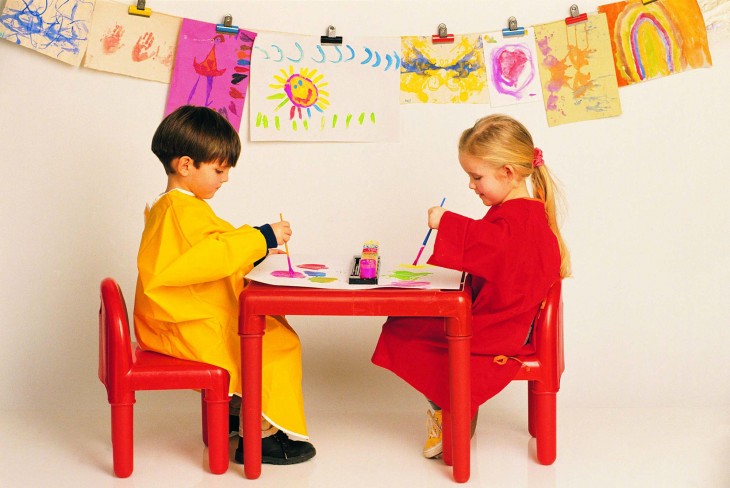 At yesterday’s Startup World LA competition, ten startups battled it out with The Kive Company’s Artkive iPhone app emerging as the winner. The app, which lets families archive children’s artwork and important moments, isn’t for everyone, but it’s definitely tapping into a massive market.

If you’re just now tuning in, Startup World is a global competition taking place across 36 cities around the world. Regional winners will converge on Silicon Valley to vie for the final crown. Artkive won’t be the only family-friendly startup at the final, as children’s learning platform Kidaptive won in San Francisco.

Artkive’s interface isn’t particularly revolutionary, but it is clean and fast. After logging in, you can upload new or preexisting photos to your “artkive”, a cloud-based repository. You can also populate a share circle with friends and family that can receive emailed links to your posts. Once you’ve got enough photos uploaded, you can order a book of them.

Founded by Jedd Gold and Jeff Lipp, Artkive arrived last fall and has been building buzz among mommy bloggers. Gold said the idea for the service came as he and his wife were trying to document their kids’ artwork.

“My wife, who is diligent about trying to document and preserve their lives, would go through this process of trying to do it, I’ll call it manually. It was an awkward and lengthy process,” he said. “Ultimately it didn’t get done because it’d take too much time.”

There’s no shortage of existing photo services that could offer this functionality, but few would be as lightweight. For instance, I’ve been trying to use Evernote to document the progress of my wife’s pregnancy, but have found the task to be frustratingly slow and counter-intuitive.

Gold pointed out that managing all our photos is a problem that all of us have in this age where we all carry cameras in our pockets.

“The sheer quantity of the number of photos you have on your phone devalues them,” he said.

However, photos preserving kids’ artwork are high value, so Artkive’s goal is to create a “virtual safety deposit box” for them. Artkive has topped 125,000 installations, with over half a million images uploaded to the service since it launched last fall.

I asked Gold whether dads have taken to the app as well, and he responded that Artkive does have a “loyal group” of dads. He also noted that a lot of dads have heard about the app and passed it along to their wives. For his part, he appreciates how the app lets his wife share his kids’ artwork while he’s at the office.

One interesting move The Kive Company has done is hire a “Chief Mom Officer”, Leila Pirnia. I was curious about the role, since you don’t see it every day. Pirnia sees her role as helping to nurture the user appeal and engagement that the app has already generated among other moms. The company hopes to keep its grassroots connection with moms as it grows and expands.

“We’ve just started formulating what we can do with this audience,” she said.

Artkive has already attracted significant interest from brands and other companies. It’s looking into partnerships and possibly licensing out its own brand for other products.

Explaining the reason for the unique CMO position, Gold said he and his cofounder felt that it made sense to have a mom on board since the company is centered around and values moms.

The Kive Company didn’t just pick any mom, though. Pirnia has a background in finance and has experience running strategy and business development for entertainment companies.

Going back to the product, I was curious what steps the startup has taken to protect the data, since it aims to be a digital safety deposit box. Gold said the service is powered by Amazon Web Services, and reassured that it’s reliable enough to protect user data.

The Kive Company is part of the Amplify accelerator in Los Angeles. Gold says the startup has had a “fantastic experience” with Amplify.

“You don’t realize how much value is being created from being under the roof of a accelerator like that,” he said.

Last year, the company raised $500,000 in seed money. The company has set its sights on raising a Series A round later this year after passing some of its own milestones.

Looking ahead, an Android version of Artkive is arriving soon, and a major update to the app that will add Facebook sharing and more book-buying features is coming later this spring.

When I asked the team to share some of their own experiences with the app, Pirnia detailed her son’s enthusiasm for the service. She said that after she started using Artkive to take pictures of his artwork, he got really excited about the process and began asking her to document everyday moments in his life to “add to his book.”

“It’s eye-opening for me how he is so involved in his app. He sees it as his own creation,” Pirnia said, adding that her son’s looking to having a book printed at the end of the school year.

I can definitely empathize with Pirnia’s son’s experience, as it’s not unlike how I’ve felt about Facebook, Twitter or Instagram at times. Clearly, our urges to keep a record of our life and preserve our memories start at a young age, and Artkive aims to help parents be there at the ready, smartphone in hand.

The Next Web was a partner with Startup World LA.

Startup World would like to thank its event partner Promojam

PromoJam is a Social Media Marketing Platform for small, medium and enterprise businesses to easily build Facebook, Twitter, and PInterest social apps online and on the mobile phone. Complete with a Social Promotions Suite, Project Management, Team Collaboration and Realtime Analytics, PromoJam is a complete solution for modern marketing teams to grow, engage and manage their social audience. PromoJam is used by many of the biggest brands in the world including NBC Universal, The North Face, Virgin America, RedBull, WetSeal, Clear Channel Radio and Warner Bros Studios.

Read next: Motorola lay-offs continue as 10% of staff is cut; affecting 1,200 jobs in US, China and India