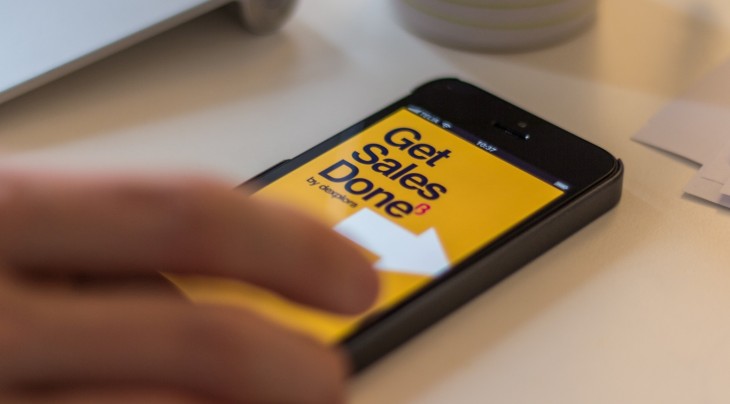 Not many entrepreneurs manage a big-bucks exit to a tech giant such as BlackBerry (formally known as RIM) , but that’s exactly what TAT-founder Hampus Jakobsson did more than two years ago.

TAT stands for The Astonishing Tribe, and back in December 2010, the Swedish team joined RIM in the wake of a $150m acquisition to work on the BlackBerry PlayBook and smartphone platforms.

TAT made a name for itself based on its mobile UX and UI designs, and was used by numerous companies. At planet BlackBerry, TAT (and thus Jakobsson) were heavily involved in the design for BlackBerry 10, but he opted to leave the company last summer, indicating a desire to launch another startup.

While there was a shortage of specifics at the time, all has now been revealed. Step forward Dexplora, a new company built by TAT founders Jakobsson and Mikael Tellhed, that’s focusing on building mobile apps for the enterprise, the first of which is GetSalesDone which launched this week in private beta.

“GetSalesDone is like a GTD system built on top of the CRM system,” explains Jakobsson.

“At TAT, we spent all our living time fixing the UI of mobile phones, while we sat in the enterprise software of CRMs, time-reporting, project-planning and so on,” he continues. “We of course updated all these systems to the latest SaaS systems and didn’t use dinosaur software, but anyhow, the user experience was abysmal.”

And so, after almost two years at RIM, Jakobsson and Tellhed decided they wanted to fix that problem. “We want beautiful and easy to use enterprise software,” says Jakobsson.

As with any new platform, it’s helpful to know what problem exactly it’s trying to solve. Having never really worked in the sales realm before myself, I’ve no real concept of how a typical sales person would operate when trying to seal a deal.

“It really depends on how rigid the management is about recording, but what most people do is when they call and talk to customers, they don’t report it in the CRM system at all,” explains Jakobsson. ”

“But when something really obvious and tangible happens, for example sending the NDA or a quote, then they’ll put a note in the CRM System, and then on Friday afternoon they’ll look at their calendar to get as much of it right as they can,” he continues. “That’s what most people do – and I’d say a lot of sales people don’t even use the CRM system at all, they’ll use Microsoft Excel, which scales really badly of course.”

The problem, as they see it, is that CRM software is great for many things, but at that very initial point, where a sales person is working to build and develop customer relations in the first instance, there is a big gap. But it’s every bit as procedural as other facets of business, and thus should be recorded accordingly – which is where a dedicated mobile app comes into play, meaning they can update on the spot when they’re out and about.

“CRM Systems are great, you can have multiple people inputting the same thing, it logs all the changes, it’s a really good system for business intelligence, but it’s a database with a UI slapped on top of it,” adds Jakobsson. “And Salesforce is the best thing out there, it’s enterprise grade, Saas-based, really secure, and you can get new people on and off it super easy. But their actual customers are the IT department and the managers.”

So Dexplora set about working on GetSalesDone, an iOS app for sales people that follows similar design principles as to what you may already be familiar with in other productivity apps such as Clear. A Web app will follow at some point too, but for now the mobile app is where it’s at, integrating with the Salesforce API, so that management and others can continue to use the CRM, while sales folk on the ground can access a separate interface built with them specifically in mind.

The mobile app is currently in beta, but will be hitting the App Store “within weeks,” and Android, BlackBerry and other versions will follow in due course.

If you’re used to other to-do list apps, then the interface here certainly looks familiar, with pulls and swipes the order of the day.

The app essentially makes ‘opportunities’, ‘contacts’ and ‘accounts’ accessible on the move, while letting users create individual tasks that they can ‘swipe’ off when they’re complete.

So GetSalesDone seems to be about tidying up the current CRM system, ensuring opportunities aren’t missed and giving sales people a tool they actually want to use.

“Sales people must get better tools,” says Jakobsson. “We know that if the UX of the CRM is great they would actually use it – not only wielding better results for the company, but of course also making the reports more accurate.”

Read next: Write for Dropbox is a near perfect way to jot down notes on your iPhone