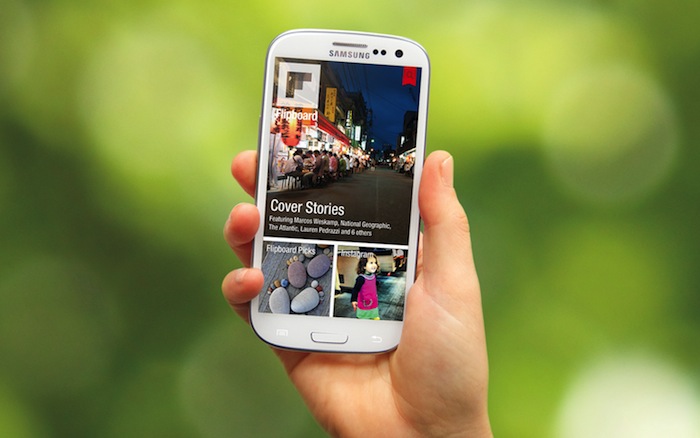 Flipboard, the popular iOS app that lets you swipe through blogs, news feeds, Twitter and Facebook like a magazine, has officially come to Google’s Android platform. It’s coming to Android in a big way though, as it will be bundled with Samsung’s new Galaxy S III phone in the US. We knew that most of this was coming, as we went hands-on with the app at the beginning of May.

Earlier this week, Google’s Bradley Horowitz told the crowd at Le Web that Google+ streams were coming to Flipboard, and here they are. Flipboard didn’t stop the Google love there, as it has also included YouTube as an available service to go along with other social platforms like Tumblr, Facebook, Twitter and Instagram.

When I talked to Marci McCue of Flipboard earlier this week, she told me that bringing the app to Android was by far the number one request it fields. You’ll now be able to download Flipboard on any Android device, including the NOOK, Kindle Fire. It will also start popping up in Samsung Apps, which is the Korean mobile giant’s app store.

McCue told me that the Flipboard experience has been completely customized for Android devices, and takes full advantage of all of the features that the platform has to offer. The fact that it’s coming pre-bundled on Samsung’s Galaxy S III is huge, as it’s coming as a full widget, not just an icon.

In addition to being able to check out your full stream of Google+ content from your Circles, you’ll be able to pull in all of the YouTube channels you subscribe to, videos you’ve favorited and the videos from people that you follow. Users on both iOS and Android platforms will be able to utilize this new functionality.

I’ve often wondered when YouTube would get this type of experience, even asking the team directly when it would happen. It would appear that Flipboard has essentially done all of the hard work for them.

I asked McCue how the company decides which services to include in the app and she told me that it depends on how often it’s requested and whether it has an API that’s ready to include and scale at Flipboard’s reach. It’s clear that Google’s two services fit that mold.

In addition to all of the announcements above, Flipboard is also rolling out fully localized versions of the app for Germany, Korea, Italy, Spain and The Netherlands. Those countries join Japan, France, China and English-speaking countries like the United States, United Kingdom, Canada and Australia.

By localizing these applications, each country can have its own unique ecosystem and content flow. Surely, content that is popular in Japan wouldn’t interest those in France.

Here’s what McCue had to say about the content choices users currently have:

People are amazed by all the things they can see on Flipboard, and often the most personal and interesting stories come from friends. Today we have over 2000 featured content partners from around the world and, now with the addition of Google+ and YouTube, we have all of the popular social networks for our readers to sit back and enjoy.

Even though we knew that Flipboard for Android was coming sometime this Summer, and some folks found their way to downloading it, the fact that it’s now officially available is absolutely huge. There are millions of people who have been waiting to get their hands on it and the time has come.

It will be interesting to see how Flipboard navigates adding new services, as we’ve been told by tipsters that Pinterest and The Fancy could be some of the services on deck for a future update.

Read next: A new security focus? LinkedIn moves to "protect members' data" as it kills off headhunting app Pealk