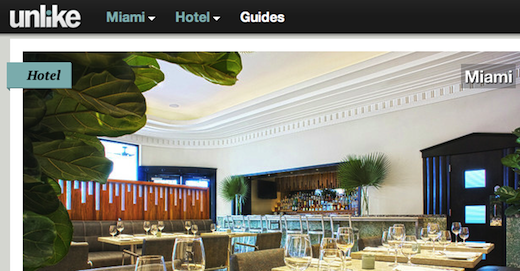 Anyone who has read the Unlike city guides will know they adhere to a particular style – they specialise in places that have a certain ‘cool’ factor. This core branding is at the heart of the all-new Unlike, a global app which aggregates user-generated points of interest (POIs) and curates the best, or at least the coolest.

And that makes it much more than merely a generic free-for-all POI generator, according to founder Marley Fabisiewicz.

The new iOS app, which will launch the user-generated features, is currently in private beta, with the Android equivalent to be relaunched soon and a Windows version pencilled in for later. Users will be able to create their own POIs with or without a picture and explanation. They can then make these POIs private or public, with the latter option ensuring they show up in global feed.

And POIs can also be organised into guides – perhaps a personalised one for your friend who is visiting from abroad, or maybe a public one for the world to see.

Marley told Silicon Allee the the global feed is at the core of the new Unlike service: “User stuff, editorial stuff, whatever, in real time you see everything from all round the world in the global feed.”

But in order to be featured on the Unlike homepage of city landing pages, your POI needs to be selected by an editor, who curates the best user-generated content and pushes it out in a more prominent way.

Users can follow each other Twitter-style, and can see the (public) content of whoever they follow. So when you load up the app and look for places nearby, you not only see the editorial listings but also entries from your friends and contacts.

“It’s like a bookmark for places,” Marley added. If you are on the go and see somewhere you like, you can take a quick snapshot and add it to your favourites and it will come up in your stream the next time you are in the area.

Unlike began in 2007, born out of frustration of not being able to find the right places to go when travelling and not finding anything online. Beginning in Berlin, the young startup was boosted immeasurably by the launch of the first iPhone – especially when the first Unlike app was selected by Apple as an app of the month.

That attracted plenty of hype as well as seed investors. But with the team trying to, in Marley’s words, “conquer the world” by expanding too quickly, the financial crisis struck right in the middle of their first financing round. The investor got cold feet and pulled out at the last minute.

An Unlike use profile

Unlike went into hibernation, with Marley heading for South Africa to enjoy a “mini retirement – go surfing, cycling and other stuff.” But the positive feedback didn’t let up and eventually the project was back on the table. This time, however, there was no search for investment; instead, the emphasis was put on finding advertisers and sponsors to help pay the bills.

With companies like Samsung, Mercedes-Benz and Levi’s now involved, this has formed the basis of the new Unlike business model. The company is also working on content partnerships, for example integrating with Airbnb through the API so that someone looking at an apartment will also see a list of the nearby Unlike cool spots.

This kind of integrated advertising is extremely attractive for brands like Lufthansa which need to vastly improve how they communicate with the type of people who use Unlike.

As for content on the new platform, it was decided that the one-dimensional city guide framework would no longer cut it; user-generated content was the answer.

Marley added: “With the very strong positioning we have, it was pretty clear what the quality of content should look like. So we don’t expect people to post McDonalds or Pizza Hut, but rather the cool things.”

In addition to the satisfaction of seeing their content picked out by the editors, the company is also planning to encourage users by creating Unlike ambassadors who will receive special rights to publish directly onto the website, as well as incentives in the form of special deals on travel, hotels etc.

The previous app – which, unlike the new version, cost money – had sales of 25,000, and there are currently around 20,000 active users. With no investors there is less pressure to produce ever-higher numbers and the current target is to have 100,000 downloads by the autumn.

So what about the competition?

It’s almost non-existent, according to Marley. “Foursquare does a great job, but for me it is like the Yellow Pages of POIs. And that’s it. The set of information you get there is quite limited.” Travel guides like Marco Polo and Lonely Planet, meanwhile, don’t hit the right spot: the 25-year-old hip girl from Prenzlauer Berg; the startup hipster guy.

“That audience is very hard to reach. You have to have a very sensitive way of communicating with these people; the language, the places you post. This is the niche we hit very well and I think that’s where we can be successful.”

Another advantage Unlike claims is that if a user travels to a city where they do not already have a strong network, they can still have access to all the cool places in the global feed – unlike on services such as Foursquare. And if they go to one of the 18 cities covered by the Unlike guides, there is also the editorial content – in contrast to an app like Everplaces, which is purely user-generated.

“We are trying to merge the two worlds; curate everything and create this unique user experience for people who are maybe between 25 and 40, rather hip, into travelling, design- and architecture-oriented people, and the thing I love about Unlike is that you’ll find five-star hotels, but you’ll also find the best kebab place or currywurst stand. We try to show the best of all the worlds. You just have to have this spirit of something unique, unlike anything else.”