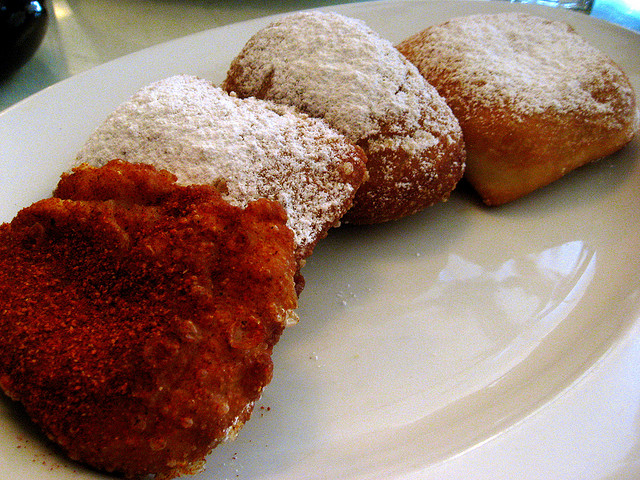 Earlier this year, we told you about popular foodie app Foodspotting relaunching itself as a discovery service and since then, things appear to be taking off.

The version of the iOS app, 3.5, which is launching today, focuses on people, places, and things. The things being menu items that restaurants offer, of course. The company has completely redesigned the profile pages within the app for restaurants and people, highlighting food that might interest you better than ever.

Here’s what the team had to say about its latest update:

We reimagined the place page in Foodspotting. The New Place Page makes it easier than ever to satisfy those Foodspotting-induced cravings by putting recommendations, ratings and reservations at your fingertips. When you look up a restaurant on Foodspotting (simply tap a restaurant name in Explore or look it up using the searchable Places tab), whenever possible, we’ll show you:

– Personal Recommendations: Based on your tastes, for example, “Try the Truffled Deviled Eggs because you’re a Deviled Egg Expert!”
– Friends’ Recommendations: See what friends and experts like Anthony Bourdain love wherever you go.
– Reviews via Yelp: Find out more by looking up restaurant level ratings, reviews and details like price and ambiance.
– Menus via Single Platform: See full menus and prices for over 400,000 restaurants.
– Reservations via Open Table: Book a date with those deviled eggs without leaving Foodspotting.

Here’s a look at the updated app:

One of the most interesting features that’s in this new version is the introduction of menu items. The feature is powered by the same company, Single Platform, that powers foursquare’s menus within the venues you find on its app. Not only is this a perfect feature to introduce to Foodspotting users, its a perfect way to help you decide on which restaurant to go to next.

In addition to drilling down to beautiful pages about restaurants and people who love the food at them, you can now book yourself a reservation using its Open Table integration, which again, is extremely handy.

We mentioned in back in February that Foodspotting was inching closer to becoming a Yelp rival:

This new move places the startup in an interesting position, since it is retaining its initial purpose, while inching towards Yelp’s territory.

With this release, Yelp reviews are pulled into the app to serve as supporting information about a restaurant that might not have any Foodspotting interactions yet. Basically, Foodspotting appears to be using Yelp as “filler”.

There’s no doubt about it, the app is beautiful, or “10x beautiful” as the team states today. It will be interesting to watch Foodspotting continue to evolve, as it could easily flip on the switch to offer deals for specific menu items as part of its business model.

Andrzejewski tells me that the company goal is to simply “make people hungry”. Did they do their job? Let us know in the comments.