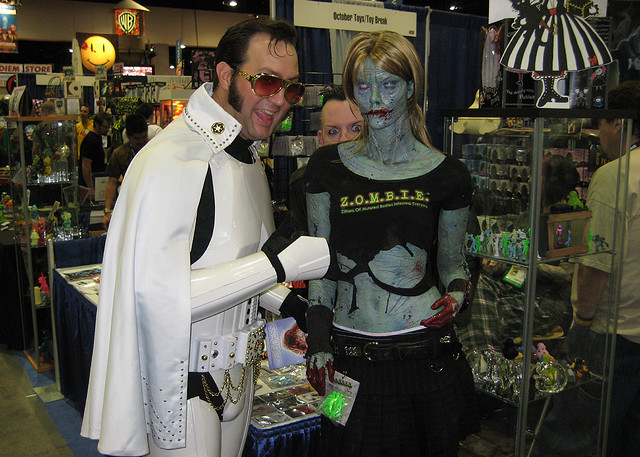 Last September, we told you about a Kickstarter campaign for an absolutely brilliant app idea. The app is called Zombies, Run! and aims to turn exercise into a full-on game.

The company behind the app, Six to Start, raised a total of $72,627 from 3,464 backers and the fruits of its labor has just hit Apple’s App Store.

Here’s how the company describes the Zombies, Run! experience:

Zombies, Run! is an ultra-immersive running game and audio adventure, co-created with award-winning novelist Naomi Alderman. We deliver the story straight to your headphones through orders and voice recordings – and when you get back home, you use the supplies you’ve collected while running to build and grow your base

It’s actually quite a blast and even if you aren’t the running type, the game works just as well if you’d prefer to walk or jog. By turning your simple exercise into an adventure, you’ll pick up the pace and burn more calories without it feeling like a chore. Nobody wants to be eaten by Zombies, after all.

Tricking you into fitness

Since the app is funded by people who really wanted to use it, the company already had the concept proofed out. The app is $7.99, which might seem a bit pricey, but when you really get into using it on a daily basis you end up getting way more out if than you paid. Zombies, Run! ships with 13 missions, but the company promises that 17 more will be released over time as free updates.

When you open the app, you’re presented with a slick “slide to run” button that will push you into your first mission. As you start the mission while you’re walking, you’re given the back story of the story you’ll be acting out.

Before you know it you’re told to pick up the pace because Zombies are running after you. When I interviewed Co-Founder and CCO of Six To Start Adrian Hon last year, he told me that a bulk of the money the company raised on Kickstarter would go to the creation of fantastic voiceovers and sound effects. He was right, because the experience is awesome and sounds movie-worthy.

As you continue to listen while exercising, you’ll pick up items that are key to finishing your missions. While the app doesn’t drag you all around the city geographically, slight twists and turns will help you get away from those Zombies and encounter the characters who will help you move on throughout the game.

It’s amazing how a few grunts, groans, and screams will put a pep into your step. You can even choose your own playlist of music that will turn into the soundtrack of your adventure in between the radio calls and Zombie grunts.

If the reviews on the App are any indication, I think that Six to Start has a hit on its hands:

So, I purchased the Zombies, Run! App for my iPhone this morning.

When I was listening to the introduction, I thought, “Hm, I think I’ll just have a leisurely walk whilst the story unfolds for now. Not really feeling like a run…”

I think this was a good purchase…

If the price doesn’t scare you away, then the Zombies surely will. But by that point, you will have dropped a pound or two by running for your life instead of just for fitness purposes.