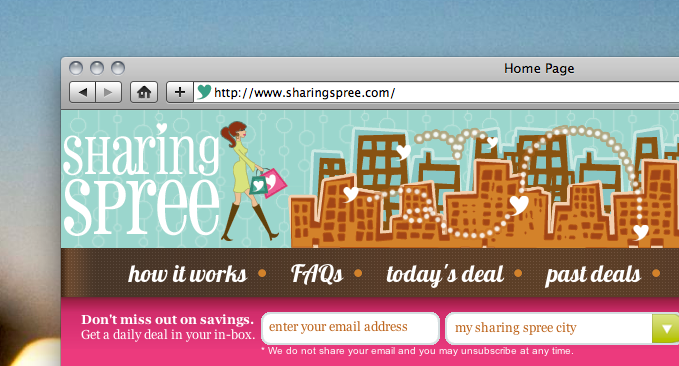 We’re overwhelmed with daily deals by this point. In order to get any sort of attention, a deals site better be doing something really special. Fortunately for Sharing Spree, everything that the site is doing is extremely special.

I had a chance to sit and talk with Sharing Spree’s VP of Marketing, Tim Moorehead. What he had to tell me about where Sharing Spree is going made sure that I would tell you about the site.

First off, Sharing Spree is dedicated solely to deals that would interest women. While men might find the occasional passing thing that suits their fancy, the lady of the house is the direction that Sharing Spree wanted to point.

At present, Sharing Spree is available only in two cities: Portland, Oregon and Nashville, Tennessee. The hope is to push Sharing Spree into many other markets soon, but the slow rollout is being done quite purposefully. Rather than push a mediocre product into 50 markets, Sharing Spree is taking its time to get things right before moving out. Its next stops? Memphis, Tennessee and Birmingham, Alabama. The other thing that you’ll notice about Sharing Spree is that it doesn’t target businesses that are directly inside of the city center. Rather than focusing on the high-dollar, touristy-type businesses, the team wanted to drive business to the smaller, lesser-known names. When you have a voice, using it for the greater good is something that absolutely should be done, we just don’t see it done nearly enough.

But it’s not just a matter of helping out the lesser-known businesses. Not being content to take the money and run, Sharing Spree has decided that a portion of absolutely every sale is going to get donated. There is presently a list of 15 non-profits and schools from which you can choose to have your donation sent. On top of that, Sharing Spree picks one non-profit or school each week and donates 10% of the site’s profits directly to them.

Is it foolish philanthropy? Not from where we’re sitting. Projects that have, in the past, worked toward the greater good of a group have proven to be successful. The site makes no secret of its intentions. There are two prominent mentions of its donation principal right in plain view.

Will it take off? I hope so. The Sharing Spree team have their hearts in the right place, and there’s still a lot to be said for genuinely caring about what you do. It might not be in your town yet, but when you see Sharing Spree start to offer deals where you are, it’s absolutely worth a look.

Read next: Microsoft Research cooks up new tool to help anyone draw like a pro