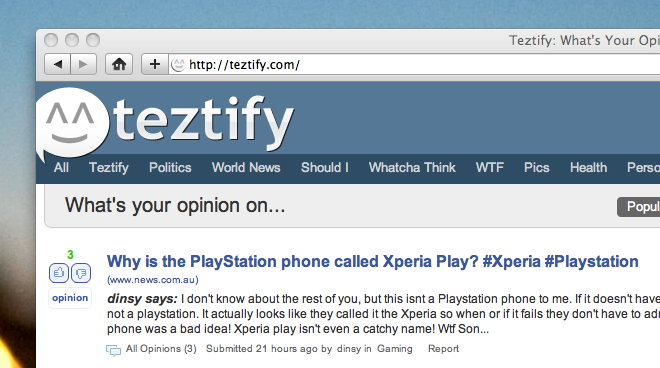 Have you ever been sitting around and just wanting to have some conversation? None of your friends are around, you’re tired of reading curated social and news sites and Quora just isn’t fitting the bill because you want discussion, not answers.

Mark Biegel had this problem too. In answer to the problem, he decided to build what he wanted. The end result is Teztify. It is, as best as Biegel can describe it, “a social opinion and discussion website”. We will just call it engaging and entertaining.

I set out to create something that I felt was more suited to my needs. I want to read content that is making an impact, news that people are talking about and news that is controversial. I would like to point out that I said “content” not “news”. This is because news articles are great, but someone willing to ask a question or just post an experience is great to read.

It has advantages over Twitter for conversation because of the ability to more easily have a thread with multiple people. Also, there’s no 140 character limit. It’s similar to Digg and Reddit in its design and function, but it’s more about the discussion rather than “hey, this is a cool thing that I found on the Internet”.

You can log in to the site via your Facebook and/or Twitter account. Once you’re logged in, you can start posting discussion topics and answering other ones. Like an answer? Give it a thumbs up. Disagree? A thumbs down is simple. It’s not a matter of what answer gets sifted to the top, it’s just a manner of keeping track of how the answers “score” overall.

Broken up by topics (Politics, Should I, Pics for example), Teztify should end up with enough content to keep you engaged for a few minutes over lunch, or hours as more users pick up on the service. A full read/write API is in the works and it has some great features for gathering an “approval rating” across the site. Oh, and it’s done in code that renders equally as well on your smartphone as it does in a desktop browser.

The site is brand new, and so far doesn’t have a vast influx of users. Let’s help that out, eh? Sign up for an account and leave your name here. We’ll start our TNW followback team and get Teztify going.

Read next: Sina to release a PC client for Weibo