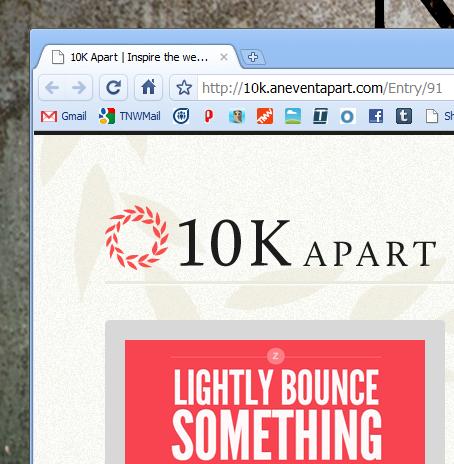 You probably remember, back in June, when we told you about Bounce. Bounce was the little brother to Notable that gave you the ability to turn any website into a collaborative whiteboard.

Well, the guys from Zurb are at it again, this time competing in the 10k Apart contest with an even tinier version of Notable. 10k Apart, if you’re not familiar, is looking at how applications can be made smaller, faster and lighter. The idea is that you have to build a web-based application in 10 kilobytes or less.

TinyBounce meets the goals, and the reviews are pretty glowing:

There are, of course, some inherent problems when building anorexic applications such as TinyBounce. Most notably, 10k doesn’t allow a lot of extra code space for caching, so TinyBounce can sometimes get slow due to server load. However, the results are pretty impressive:

As you can see, I did a TinyBounce on my own site, and this is the result that comes out once it’s done. The URL in the top right is static, allowing me to make annotations then send the URL to others to do the same. While the features are heavily cut down in TinyBounce versus the original Bounce application, it’s still highly effective considering that it is under 10 kilobytes.

So head over to the 10k Apart competition and check out TinyBounce, as well as the other entries. Voting is still open, so click some stars while you’re there. Here’s hoping that TinyBounce stays even after the competition is over.

Read next: Orange: No White iPhone 4 Handsets Until End Of 2010