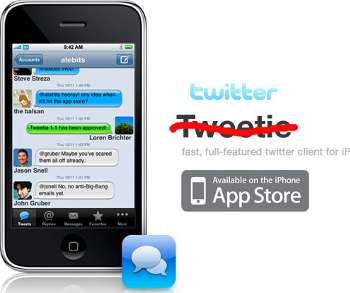 Twitter’s iPhone app is about to go live in the Apple App Store. For all intents and purposes, the app is Tweetie 3.0, but with Twitter’s acquisition of Tweetie last month, the app is now the official Twitter app (although you won’t find the word “official” in the title, as Twitter’s development community wouldn’t like that).

As we reported last night, Tweetie 2 was taken down from the App Store, presumably to make room for the Twitter branded app.

At Twitter’s first developer conference last month, Chirp, CEO Evan Williams said that many people were going to the App Store and searching for “Twitter” and when they didn’t find anything that had Twitter in the title, they would just leave, unaware of third-party options such as Tweetie, Tweetdeck and Twitterific.

As soon as the app is live and available for download, we’ll test it out and let you know what we think. Most likely, this release will not include an iPad app, but there is an outside chance (so for now, Twittelator is still probably your best best). One final note: Twitter has removed the $2.99 price tag from the app and it will be free to download.

Read next: Amazon puts on the boxing gloves; releasing Kindle for Android.