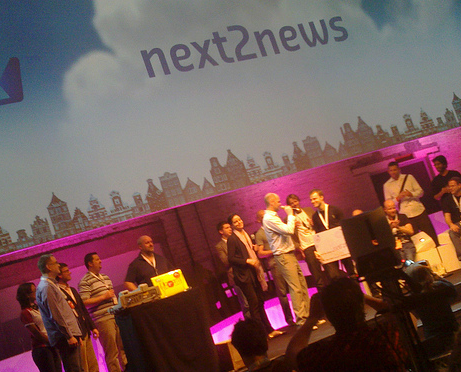 Last week the Internet stopped for our annual event, The Next Web Conference in Amsterdam. Each year the event sees hundreds of companies apply to present and hopefully win our prestigious Start-up Rally, sponsored by Paypal X.

The competition this year was as fierce as ever but one company finished as winners, Next2News with a ingenious idea to get ads out of the random sidebars and next to relevant content. Let’s explain but first, a little background.

Who and What is Next2News

Founded by Sander Koppelaar, Next2news launched in March, is self-funded and based out of  the Netherlands. The company aims to turn quality relevant articles into ideal spots for potential advertisers, big and small. With its team of seven, the company announced its international launch and partnership program at the TNW conference, having already partnered with six local news sites including three Dutch national newspapers.

Koppelaar (left) explains: “When a marketer or entrepreneur finds a relevant article, she can claim it directly. She creates a banner and selects how long it will be displayed: a week, month or year. The ad is online in minutes.”

How it exactly works

There is a fixed fee per ad, costing anywhere from 20 and 200 euros per article, rather than the traditional CPC or CPM models used in online advertising. The price of the ad reduces over time and advertisers can keep tabs of new stories by setting up alerts for specific keywords.

Example of an ‘advertise here’ link:

The genius of the business lies in its simplicity. For publishers, they’re able to place advertising slots next to specific articles they think should be on interest to advertisers. The process of inserting ads is entirely automated and open to advertisers, big and small.

For the advertiser, there’s a far greater degree of control and relevancy in comparison to the standard CPC or CPM models. Advertisers know full well where their ads are displayed and is likely to receive a good deal more for their money (with an increased click through rate) due to the relevance of the ad. Finally for the reader, with relevancy comes a far more thorough browsing experience with advertisements hand chosen to specifically appear next to that article.

That said, I do have a couple of concerns and they don’t so much lie so much with the company’s business model. One is the possibility that Next2News might just be missing the boat by not expanding Internationally faster. The system, at least on face value, feels easy to replicate and with much larger markets abroad surely it’s only a matter of time before someone with access to funding sets this up in the US or UK. Secondly, although not quite as significant, is this going to lead to an overwhelming number of articles specifically designed to sell advertising? Or are we there already?

As mentioned, Next2News begun its life in The Netherlands and its TNW Conference appearance will now see it expand into neighboring Belgium. Elsewhere the company is open to international partnerships to bring the service to other countries, if interested you’ll find contact details at the foot of their site.