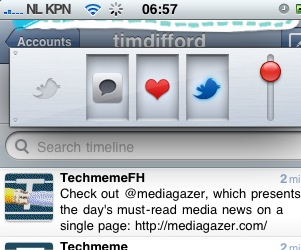 Tweetie 2.1.2 is now available in the iTunes app store – the first update since the app was acquired by Twitter and what is likely to be its last before it becomes Twitter for iPhone.

Twitter caused as storm when it acquired Tweetie 2 from Atebits last month prompting developers around the world to throw their arms up in horror as they watched the social media giant ‘move the goalposts’ by entering a market which had previously been left to third parties.

After moves to calm the global developer community at the Twitter conference ‘Chirp’, the company has pushed on with its plans and work on the Tweetie iPhone app has already commenced.

The latest release of the app (2.1.2) is now available for download in the iTunes app store [iTunes link] and is probably the last to be launched under the name Tweetie. Officially, the app has been released to accomodate some Foursquare fixes, but the release notes also list a “surprise”.

It turns out that this surprise is a a slot machine game which appears when you pull down your timeline to refresh your tweets. The message seems to be “Tweetie’s Won The Jackpot!”. When the barrels of the slot machine have finished spinning a splash ad appears saying “Coming soon! Tweetie will be Twitter for iPhone”.

Now I just need to work out how to play the actual game!!