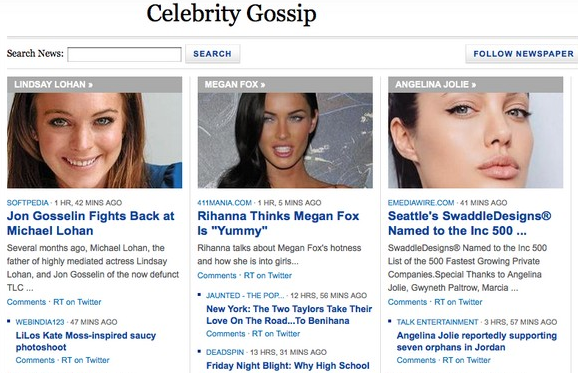 With so much news out there on the web, finding a way to hone all that information down to a personal news stream has turned into an industry.

In the past year we’ve had LazyFeed‘s real-time discovery engine, Google News’ custom topics and many other attempts to make content easier to be found. The latest entry to the race comes from NewsCred, a Swiss start-up with Silicon Valley VC backing.

NewsCred launched the first version of its site in August 2008 as a news aggregator that ranked news by ‘credibility’. Today it relaunches as something quite different: a ‘Ning for newspapers’.

What’s interesting here is that the site combines custom news streams with a blogging element to create a newspaper-style site. Once your ‘newspaper’ is created you can share it with others easily via Twitter or email direct from the site.

Upon creating an account, it’s quick and easy to add different ‘sections’ to your newspaper by searching NewsCred’s pre-defined categories or creating custom searches. I put searches for news about Rupert Murdoch and Google on my front page and stories were pulled in from the BBC, The New York Times and other major news sources.

Where NewsCred differs from its rivals it the fact that you can put your own spin on the news with an ‘Editorial’ section. Essentially it’s a blog that runs alongside the imported content. This is a clever idea and one that makes NewsCred a service useful for people who want to curate a news hub with their own original content.

NewsCred is a nice idea but one that is in desperate need of some love from a graphic design team. Despite some basic customisation tools, all NewsCred sites look like traditional newspapers. The ability to apply some 21st Century eye candy would be much appreciated.

While NewsCred’s new consumer site launches today and is free to use, the company is preparing an API for enterprise customers to build their own products around. For businesses wanting to keep employees up to date on industry news while adding their own ‘company line’ editorials, this could have some appeal.

NewsCred is cagey about its investment so far. All they’ll say is that the amount was less than $1M, including money from private investors and some funds from one of the oldest VC firms in Silicon Valley. While their consumer proposition will need some work, their enterprise API makes NewsCred a start-up to keep an eye on this year.

Here’s a look at the site I built in all of five minutes using NewsCred. In keeping with the service’s old-school design I gave it an old-school name: The Martin Bryant Times.

Read next: "Get OFF Facebook AND Get a Puppy"