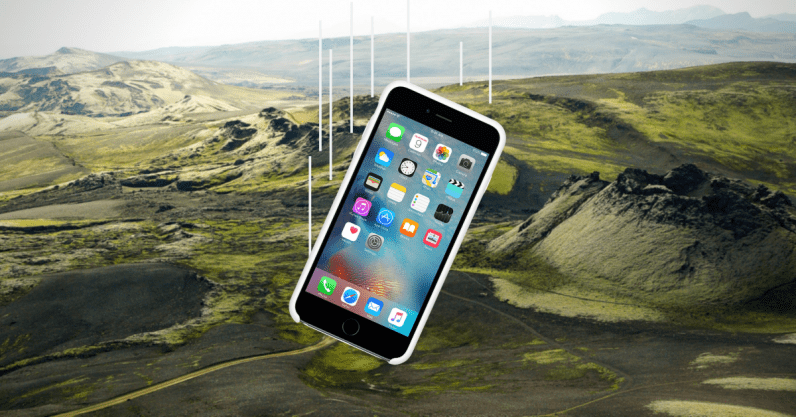 The Nokia 3310’s robustness is legendary, but it seems it has an unlikely new contender when it comes to durability: the iPhone 6s Plus.

Last year, photographer Haukur Snorrason was on an aerial photo tour of the Skaftá river in South Iceland to grab pictures of the yearly glacier river floods. Unfortunately, when he grabbed his iPhone to film the flood, the phone got swept away by a gust of wind. Falling 60 meters (200 feet) down on rocky terrain — where a massive river was overflowing and rupturing roads — the time came for Haukur to say goodbye to his phone forever – or so he thought.

Or so he thought, until 13 months later, when he received a phone call from people that had found his phone while hiking. After falling from a plane, and spending over a year exposed to the harsh Icelandic elements, it still worked!

And what’s more, the phone caught the whole thing on video:

In the video, you can see the phone ‘taking off’ and spinning not so gently down to the ground — where it films the sun while the sound of the airplane slowly fades away. But how the hell did the phone survive?

“Luckily the phone landed on a patch of moss that grows here and there in the lava field,” Haukur told TNW. “The moss in this area is rather thick, can be up to 30 cm, so that’s the main reason it survived the fall I think.”

After dropping the phone, Haukur contacted a local farmer to see if he could find the phone as he couldn’t go looking for it himself due to the flooding — but unfortunately had no such luck.

“That was on August 4 2018. Then on September 14, 2019, a couple of Icelandic people were walking in the area and saw the phone just lying there. They contacted the land owners and realized it was my iPhone when they connected it to the computer and it said : Haukur´s iPhone,” Haukur explained.

Amazingly the phone still works after all this time, which Haukur believes is largely because it landed face down on the moss, with its plastic case facing up and bearing the brunt of the Icelandic weather.

“I can still go on the internet, I can send photos and video like the one of the fall. The only real damage is that I can make calls but the other persona can’t hear me,” Haukur said.

So if you’re in the market for an indestructible phone, you might be better off going for iPhone 6s Plus than a Nokia 3310. At least it can make some rad videos.

Read next: China has no idea when it will launch its digital currency