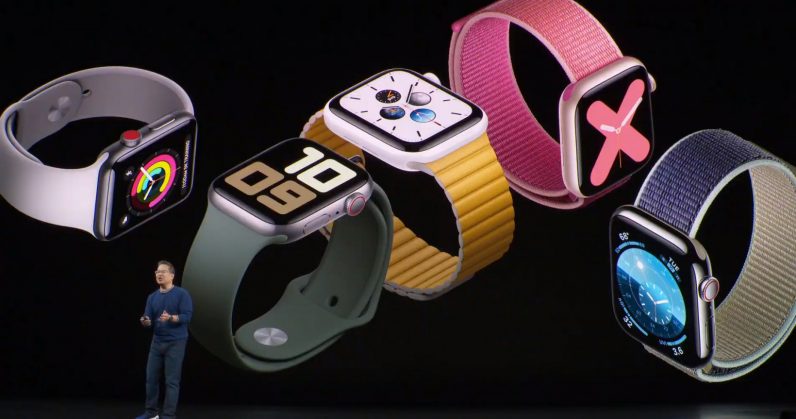 The Apple Watch packs new hardware, including an Always On retina display. Users will be able to see their watch faces without raising their wrists or tapping the device — though, according to Apple, the screen will be dimmed when the user’s wrist is down. Reportedly, this won’t affect battery life — the Series 5 will still have roughly 18 hours of battery.

The phone will also have new software, including international emergency calling, which works with built-in fall detection to alert authorities should you ever take a tumble. The Series 5 will also have a built-in compass that shows latitude and longitude, inclination, and elevation in addition to heading. Apple also specified that the new Apple Watch does, in fact, tell time.

In terms of fashion, the Series 5 will have more case colors than previous generations, including a spiffy titanium and a pristine white ceramic. The Series 5 will also have a range of new bands, including sporty Nike bands and the bougie Hermes bands.

Apple led into the announcement by touting the health benefits of the Apple Watch. The reveal opened with a series of interviews with people who’d had serious medical problems or injuries detected through the tech in their Watches.

Building on that, Apple revealed it’d be launching three new research studies, for hearing, women’s health, and hearth and movement. Anyone who wants to participate in the research study may do so through the Apple Research app — the company was quick to point out it won’t have access to any of the users’ information.

GPS models start at $399 — $499 for GPS and cellular — and you’ll be able to pre-order them starting today. They’ll be available in stores on September 20.

Read next: Apple reveals the iPhone 11 with an ultra-wide camera