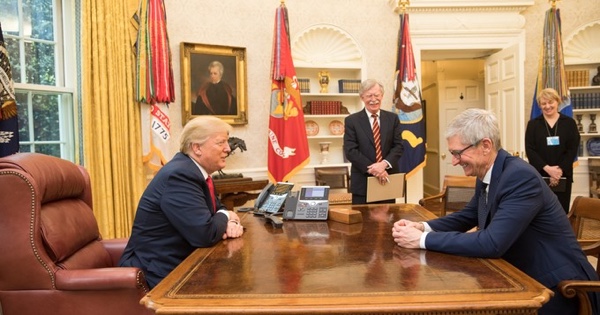 It looks like Apple is gunning for some sweet tariff exemption from the US for its manufacturing. At a dinner with President Trump over the weekend, CEO Tim Cook expressed concern that Korean giant Samsung might gain an edge over the iPhone maker because it pays less in tariffs.

Trump said Cook made a very good argument about competing with Samsung if the iPhone maker had to pay tariffs:

I thought he made a very compelling argument. It’s tough for Apple to pay tariffs if it’s competing with a very good company that’s not.

In July, he had said Apple won’t get any exemption from tariffs if it produces goods in China. Earlier this month, analyst Ming-Chi Kuo said that the company should be able to absorb any cost increase caused by tariffs without impacting customers.

The company has already taken steps to increase manufacturing in India and Vietnam. Kuo said Apple will be able to meet the demand of iPhones, iPads, and Apple Watches to the US consumers from non-China locations as early as next year, but Mac production outside China might take till 2021.

However, Trump’s statement means Apple might escape from extra manufacturing costs. Wonder if the rest of Silicon Valley is filling his inbox with dinner invitations too.

Read next: Xiaomi, Oppo, and Vivo team up to create an AirDrop competitor